Kenmare Veteran’s Club, Inc., is known for being generous with their charitable gaming funds. After all, they just served as the 2009 corporate sponsor for the Kenmare GooseFest. Then they capped that celebration with the announcement during Saturday’s banquet of a $50,000 donation to the Kenmare Fire Department’s fire hall building project. 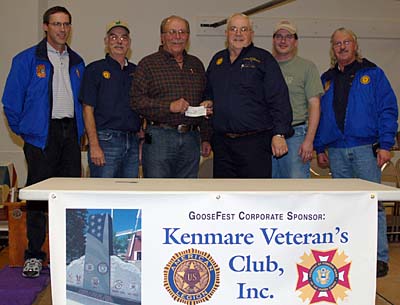 Funds were presented to the Kenmare Fire Department

Banquet with, l-r, Veteran's Club board members David Sigloh and

Kenmare Veteran’s Club, Inc., is known for being generous with their charitable gaming funds.

After all, they just served as the 2009 corporate sponsor for the Kenmare GooseFest.

Then they capped that celebration with the announcement during Saturday’s banquet of a $50,000 donation to the Kenmare Fire Department’s fire hall building project.

“We figure it’s a worthwhile donation,” said Walt Weaver, who serves as chairman of the Kenmare Veteran’s Club board. “We wanted to see [the firefighters] get moved in there.”

The Kenmare Fire Department has been working on the new fire hall for the past 10 years, starting in 1999 with a request to the city council about pursuing the project. Now, construction is nearly complete on the building’s exterior and the truck bay, but finish work inside the new hall was not included in the construction bid.

Chuck Leet, KFD secretary-treasurer, explained that contractors’ bids to finish a meeting room, kitchen area, bathrooms, office area and storage space had come in around $96,000. “That’s a 32’x60’ space at the south end of the building,” he said. “The cost of hiring a contractor was too much for us.”

Leet and other members of the fire department’s building committee created a proposal for the Kenmare Veteran’s Club after talking with Farmers Union Lumber in Kenmare about materials, Burke-Divide Electric Cooperative about electrical work, and Butch Norrie of Farmers Union Oil Company in Mohall about plumbing.

“Basically, if they would buy the materials, we would have a volunteer effort to construct that end of the building,” said Leet.

Norrie, who is also a member of the fire department, talked about donating a portion or all of his labor and Burke-Divide Electric offered to donate labor and certain materials.

Leet said he submitted an application to the Veteran’s Club for $47,500 to cover materials, but the group increased the donation to $50,000. “I was just thrilled when I got the call,” said Leet. “They were very generous. This will pay for all the materials we need to put in that area.”

Leet and truck captain Nate Condit accepted the donation during the Landowners Appreciation Banquet held Saturday evening at the Kenmare Memorial Hall. Weaver and other Kenmare Veteran’s Club board members Stan Freeman, David Sigloh and Duane Dockter made the presentation.

The Veteran’s Club has supported the new fire hall project for over $100,000 during the past two years, according to Weaver. The group first donated $20,000 to the fire department as building designs and plans were completed, then provided another few thousand dollars when the project’s donation sign was erected on the lot for the new hall.

A year ago, Kenmare Veteran’s Club provided $30,000 to the fire hall project when the fire department led a community-wide effort to cut down and remove nearly 100 trees in town that infected with Dutch Elm disease.

The recent $50,000 donation will again involve the residents of Kenmare, especially anyone with carpentry, painting and finish work skills to share. “What we need to do is put the word out that we need volunteers in the community who have experience at framing, dry-walling and all the other aspects involved in finishing off this project,” said Leet.

He listed a variety of tasks necessary to complete the hall’s interior, including framing, electrical work, plumbing, sheet rock work, painting and installing ceiling tiles. “This has to go in stages,” he said. The flooring will be installed professionally, which is already included in the donation from the Veteran’s Club.

Volunteer names will be compiled, and the materials and fixtures will be ordered. “Once that’s in place, we’ll line up a schedule,” said Leet. “There’s quite a choreography that’s going to have to take place to get everything done.”

He laughed as he compared this phase of the building project to the tree project done in Kenmare last November. “Then, we had more than a hundred volunteers, all working that one day and we got after it,” he said. “This [fire hall project] has to come off in a certain order.”

The fire department is also seeking a couple of experienced local builders to volunteer their time to work directly with Leet in overseeing the process. “We want to put together a three-person team to make this thing roll, just to make it come off right,” said Leet.

The volunteer effort can begin after Hight Construction completes their work on the building. Leet noted the water lines were insulated, the first phase of the electrical work was done, and plumbing in the truck bay was almost finished. Painters were scheduled to paint the walk-in doors to the building this week.

He complimented Hight Construction and project superintendent Bob Otteson, who is a volunteer board member for the Minot Rural Fire Department, for their work on the building and attention to detail. “Hight Construction has been very cooperative with us, and they’ve tried hard to leave a good impression,” said Leet.

He continued, “We can’t go in and start until Hight Construction says the building is yours. I don’t want a thing to stall construction here!”

Weaver said the Kenmare Veteran’s Club board agreed with that plan. “With a public building like that, certain things need to be done,” he said. “We want to see them get [moved] in there!”