When the thunder starts rumbling before a summer storm in Ward County, most folks head indoors and shut the windows to wait out the weather. Contrary to common sense, Chad Gravesen and Derek Peterson make a dash for their airplane. 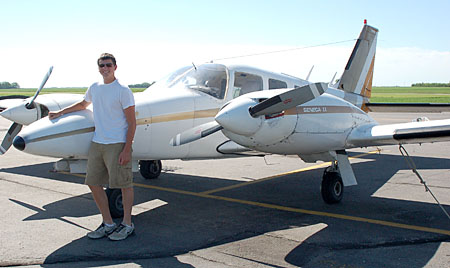 Second generation NDCMP pilot . . . Chad Gravesen, a 2008
KHS graduate, is working as an intern pilot for the ND
Cloud Modification Project this summer. He flew the
twin engine Piper Seneca tied down at the Kenmare
airport (above) for several weeks before moving on
to one of the other NDCMP sites. Gravesen's father
Mark Gravesen actually flew for the program during
the 1977 and 1978 seasons before going on to a career
as a flight instructor, charter pilot and commercial airline pilot. 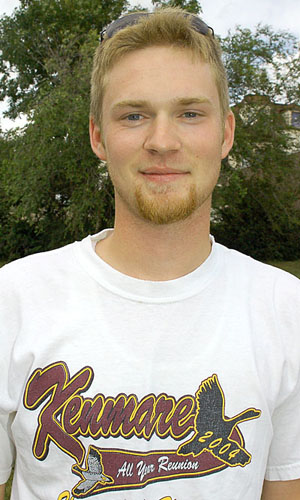 Taking to the skies . . . Derek Peterson,

a 2006 graduate of Kenmare High School,

is flying for the ND Cloud Modification Project

as an intern pilot this season, working

to suppress hail and enhance rainfall in Ward,

When the thunder starts rumbling before a summer storm in , most folks head indoors and shut the windows to wait out the weather.

Contrary to common sense, Chad Gravesen and Derek Peterson make a dash for their airplane.

More specifically, for the twin engine Piper Seneca tied down at the , or another of the seven similar planes parked in , Williston, , and Bowman leased by the North Dakota Atmospheric Resource Board (ARB) for the 2010 ND Cloud Modification Project (NDCMP).

, a 2008 graduate of , and Derek, a 2006 KHS graduate, are two of the intern pilots working for the NDCMP this summer. Both attend school at the University of North Dakota, where they’re majoring in commercial aviation. , who will start his junior year in the program this fall, is adding a minor in meteorology. Derek plans to graduate in December.

The NDCMP accepted only nine interns for the 2010. “A lot of the time, they don’t even have any people [as interns], and this year there are two Kenmare boys,” said Derek.

Derek laughed as he talked about how often he is asked about flying into thunderstorms. “It’s good flying experience,” he said, “flying around weather like that. It’s a flying experience you’d never get anywhere else.”

“It’s a good way to build hours and flight time for my future career,” said .

, the son of Mark and Tami Gravesen, wants to work as a commercial airline pilot and hopes to land a job with a regional carrier when he finishes the UND program in December 2011. “I like to travel and it’s always interested me,” he said. “I’ve seen some of my family fly.”

Those family members include his father, a former NDCMP pilot himself flying now for Delta Airlines, and his cousin Kelly Gravesen, who also flies for Delta. Immediately after finishing high school, set off for and the UND Department of Aviation. “I went straight to summer school,” he said. “In fact, this is the first summer of no classes for me.”

The NDCMP continues through the end of August, but will go back to UND earlier in the month. “I’m hoping to instruct at UND for the school itself,” he said, adding he will attend a hiring and interview workshop for those positions during the first week of August.

Derek, the son of Curtis and Susie Peterson, didn’t come from a flying family like ’s. Instead, Derek attributed his initial interest in airplanes to his grandfather, the late Eldon Cook of Kenmare.

Grandfather and grandson would spend hours together poring over a collection of books about airplanes that Eldon kept in his living room. “He worked on planes in before World War II started,” Derek explained. “Then, he was drafted.”

He paused and grinned. “But what really got me hooked was watching Brekhuses spray,” he said, referring to Great Plains Aero operated by Palmer and Karen Brekhus and their son Julius Brekhus.

Derek started flying during his first year at Williston State College, taking private lessons at age 18 in a single engine Piper Warrior and earning his license by age 19. He completed his general courses at Williston, then transferred to UND starting his sophomore year.

He admitted that working as a spray pilot interested him following graduation, given his own interest in farming. “The airlines aren’t really hiring right now, because of the economy,” he said, adding he would prefer to work as a corporate or charter pilot anyway because of the scheduling and the time away from home.

Then he smiled again. “And I’m working on getting my own plane,” he said.

Even as they talk about their futures as pilots, and Derek stay focused on the present, on call for the NDCMP essentially 24 hours a day from June 1 until the end of August.

joked about the schedule. “A typical work day? I wake up and do nothing,” he said.

“It’s one of the easiest jobs I’ve had,” Derek added. “Sometimes we fly all night and sleep all day. On the morning of July 3rd, I was out from midnight until eight in the morning.”

Actually, the intern pilots assist NDCMP pilot Greg Shepherd in Kenmare with maintenance on the plane and keeping the chemicals stocked and mixed for flights. “We pay attention to the radar and the weather,” Derek said, “and we get daily briefings at noon.”

“There are two radar [centers] in [for the NDCMP] and we talk to the one in ,” said . “They call every day and give us a weather briefing. They tell us when to launch.”

If thunderstorms appear imminent for the day, the pilots preflight the plane and prepare the chemicals. Then they wait at the airport for further instructions.

and Derek admitted they enjoyed receiving those calls to head into the storm. “We’re up in the meat of it,” said, “but we don’t get nervous. We don’t fly directly into the storm. We’re looking for areas of updraft.”

“We’re looking for a big, puffy cloud,” said Derek, describing the ideal cloud tops as looking like cauliflower. “We want those crisp clouds with height and a smooth dark face on the bottom.”

The pilots watch for a shelf cloud under the thunderstorm. Using their gauges for engine pressure and vertical speed, they locate areas of updraft and relay the information to the office. “We prefer an updraft of about 500 to 1000 feet per minute,” said Derek. “Less than that is not strong enough to bring the seeding material to the level where we want it, and too much [updraft] shoots our material out of the cloud.”

“We tell them what we’re seeing and feeling for the updraft,” said. “They tell us when to fire.”

The plane releases silver iodide from two wing-tip generators “We can see flames when we’re flying at night as the silver iodide is released,” said. “For strong storms, we have 24 flares with silver iodide we can release.”

“It’s critical that we release chemical at the right time in the right place,” added Derek. “Clouds don’t last very long. And it’s actually quite a smooth flight. On top of the storm would be more turbulent.”

The silver iodide acts as a substitute for ice crystals in the storm cloud, and allows super-cooled liquid water in the cloud to freeze. According to the ND ARB, seeding effects can be seen any time from almost immediately to within 30 minutes, depending on conditions and the seeding method.

The desired result is increased precipitation production of the cloud. “If you turn around and look [after seeding], you can see the clouds kind of dissipating,” said Derek, “but it’s hard to see any results at night.”

If hail is forming in the cloud, the goal of seeding is to suppress its development. “We can’t deny it’s going to start hailing,” Derek explained. “We try to make it hail smaller so it melts before it hits the ground. So it may come down the size of peas or marbles, instead of something bigger.”

If the goal is rain enhancement, seeding leads to quicker rain production, which may or may not fall exactly where farmers want the moisture. “We just make it rain sooner,” Derek said. “We can only work with the clouds and what the clouds give us.”

The 2010 season started with fairly active weather. By the beginning of July, had flown almost 20 hours. “I’d like to have more storms,” he said, then laughed, “but not so much for the farmers around here.”

Although most of the flights are routine and the pilots follow strict safety procedures, he recalled a few particular moments. “We’ve had one lightning strike this year,” he said, “and for our storm on the night of July 1st, we had three planes up. We could see it from a ways away, and we were looking for lightning so we would know where the thunderstorm was at and know where to avoid.”

He and Shepherd couldn’t actually find anywhere suitable to seed in that storm. “We had to land, then the storm blew up and moved out of our district,” he said.

Storms on the night of June 24th, which produced hail, rain, strong winds and tornadoes, proved to be exciting. “We were up for three and a half hours,” said. “That was one of the longer sessions we’ve had. Sometimes, we have to land and wait out the storm. Other times, we land and reload chemicals to go back up.”

Derek described one uncomfortable night of flying. “We were high in the clouds, looking for the thunderstorm, and we were bouncing around really well,” he said. “The lightning was like strobe lights and we could see ice building up on the wings. We were up for about an hour and both of us were getting queasy.”

He and the pilot finally decided to land in order to clear the ice. “Then, we returned to the storm and dropped about 60 flares into it,” he said.

Both Derek and have worked a stint at the Kenmare NDCMP base, but they’re rotated through other sites, including Minot and Williston, where a larger plane is flown. “They use a big plane that flies through the top tier of a thunderstorm and drops dry ice,” said Derek. “That makes the clouds nucleate faster. I like having the chance to fly different kinds of planes.”

The NDCMP operates in two districts in the state, including District 1 in Slope and Bowman counties and District II in Ward, Mountrail, Williams and McKenzie counties. Counties pay about two-thirds of the expenses for the project, with cost-share funds provided by the State for the balance. Cost of the 2010 NDCMP was expected to be 12.5 cents per acre.

From time to time, results of seeding are documented and studied to evaluate the effectiveness of the program. Hail data collected during the 1970s from the North Dakota Pilot Project showed less hail on seed days than on no-seed days, and lower crop-hail insured losses on seed days than on no-seed days. In fact, a 1997 study of crop-hail insurance data estimated a 45 percent reduction of crop-hail damage in the seeded counties.

In terms of economic benefits, a 2009 study by agricultural economists suggested a $12 million impact from the NDCMP considering a 5 percent rainfall increase and a $19.7 million impact considering a 10 percent rainfall increase. Additional benefits from a reduction in hail damage were not calculated in the study, but were presumed to be substantial.

For and Derek, the internship with the NDCMP has provided the perfect summer job in terms of time and money. “I get more hours in my log book,” said Derek, “and I found something where they pay me to fly.”

is already considering a return to the NDCMP next summer. “This is one of the best jobs I can think of in ,” he said.

“The best part is getting to fly a twin engine and help out the local area,” added Derek, “but then I get blamed for making it hail!”