Petroglyphist displays his artwork on the prairie

The Kenmare area’s newest and most enduring work of art may not be viewed by most of the local residents. That realization doesn’t bother petroglyphist Kevin Sudeith, an artist who carves images in stone. 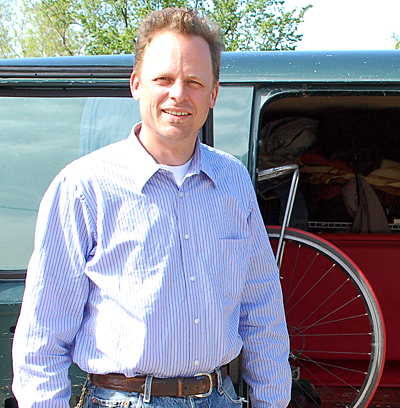 Leaving his mark across the West . . . Petroglyph artist
Kevin Sudeith of New York, NY, makes a stop in Kenmare
on his way back to his workplace west of town. 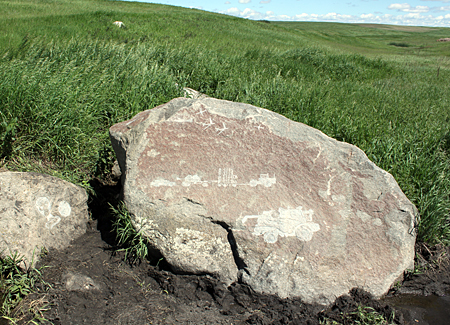 Farming technology carved in stone . . . After a month of work,
artist Kevin Sudeith finished this archive of modern farming, complete
with a combine, a tractor-sprayer-chemical-pickup rig and airplanes
(top left on large rock) on Joe Staael's property west of Kenmare.

The Kenmare area’s newest and most enduring work of art may not be viewed by most of the local residents.

Sudeith arrived in Kenmare in early May and worked until the end of June on a rock carving that features some of the modern agricultural technology he believes characterizes this area: a tractor-sprayer-chemical-pickup combination driven along a gravel road by area farmer Lowell Nelson.

Actually, the carvings are part of a larger picture that includes airplanes from Minot Air Force Base and a modern combine, all images Sudeith associated with the area.

For Sudeith, the project in Kenmare started with simply walking around, seeking the perfect rock. “I spent about a week traipsing fields mostly,” he said. “I was fortunate in that Lowell Nelson took me around and showed some places.”

He shook his head over the irony of seeking a suitable stone for his work, while so many of the people living here spent their childhoods removing rocks from the fields.

Nelson suggested looking on Joe Staael’s property. “Joe drove me around and he took me to a rock he’d dragged a half mile,” said Sudeith. “It was as big as my van and well-situated to the road. As soon as I saw it, my search was over.”

While most local residents might simply note the size of the rock, Sudeith required a hard stone with a smooth carving surface. “Natural shelter is a primary goal, but not a viable variable here,” he said. “This boulder is in a nice spot, with a scenic coulee.”

He described the granite selected for this project as gray with a red patina on one side, which was the face he used for the agriculture images. “I’m doing wheat farming imagery on the east side,” he said, explaining that he starts with preparatory drawings and then tries practice carvings before he starts on the chosen rock. “On the south side, I want to do some oil wells and trucks. There’s one injection well out there.”

The oil activity was something of a surprise to Sudeith. “I came here to do wheat farming,” he said, “but I realize [the oil boom] is having a strong cultural effect. It sort of underpins the conversations I hear in cafes and libraries. There are people who are here who aren’t from here. They’re part and parcel of the oil and the community seems to be in flux.”

One of Sudeith’s goals for the project is to tell the story of a particular family in a particular place, using images related to American technology. “It’s a way to honor ancestors and to illustrate the broader history of the area,” he said. “The people here were coming from and took up wheat farming, and then there have been all these technological changes in farming.”

The wheat farming imagery he chose for the Kenmare petroglyphs presented its own challenges, though. “I haven’t drawn big, knobby tires before,” he said, “so I’m using a practice rock and working with Versatile 835 tractors.”

After he finished the preliminary drawings and carvings, Sudeith started on his chosen rock, using a variety of different chisels. “They’re specialized,” he said. “Some I’ve made for the job.”

He allotted two weeks for carving, but he factored in time for his own technological component of the project--his database. “I’m also building a digital archive of the work,” he said. “I’m working on different ways of representing the work and commenting on the archivality of different mediums.”

Sudeith took photos of the site and the progress on particular carvings, logging information about GPS latitude and longitude coordinates and zip codes carefully. “There will be indexes of the sites, the histories of the sites, images on the sties and categories of images,” he said. “Each print with a number will be available on the website and owners of the prints can reference the database.”

The material will be shared online through his blog “The Petroglyphist’s Adventure,” Facebook, Twitter and other outlets that become available. One of Sudeith’s hopes for the project is that other people will recreate his journey by following the records he makes available

Art as an archive

He traces his intense interest in petroglyphs to a visit he made to in the 1980s, where he traveled to the Kimberley Plateau in the western part of the country. “There were ancient and newer cave paintings there, like living art work,” he said. “I was interested in the imagery of cave paintings I’d seen. I had done some paintings on rocks, and I was also interested in archival art. That’s a key to important art, that it’s traditional and yet represents the moment in which it’s made.”

Sudeith wanted his art to represent the moment for the future, which led to problems for his outdoor paintings. “It’s hard to find a place to paint outside and make it last,” he said, “so I thought I’d do carvings.”

He describes petroglyphs as the most durable work done by humans, and he wants to focus on the accomplishments of human endeavors. Previous carvings done in state, and include images of different types of hot air balloons and aircraft, including a space shuttle.

Once the carvings are complete, Sudeith makes both impressions and photographs of the images. “Each image carved in a rock is unique, and similarly, each impression, or print, is unique,” he said. “Each print is given a unique identifier...and each individual print belongs to a larger edition of up to about 20 prints. Prints are the city cousins to their rural ancestors, for they give their wild relations a life in people’s houses and lives.”

The carvings stay in place, free to be observed, discussed and pondered by anyone who happens upon them. Sudeith exhibits and sells the print impressions, made with soaked paper, and photos.

Sudeith grew up next door in in , , but left for college first in , then the San Francisco Art Institute where he earned his undergraduate degree. He moved to , 18 years ago ostensibly to attend graduate school, but really to make his way in the art world.

He exhibits in galleries, but he also operates a rug business that specializes in Persian and Afghan carpets. “ is the rug hub of the ,” he said. “This is a parallel to my art career.”

He spends an average of two or three days each week in the rug business, then devotes the balance of his time to art. For this western petroglyph project, however, his carpet sales have been put on hold. “My regular rug business is in hibernation,” he said.

Sudeith began packing up his old life last winter as he prepared for his project in the West. “This is the first step in a series of stops,” he said. His itinerary for the year is somewhat flexible and includes Thermopolis, WY, Salt Lake City, UT, a return to Telluride, CO, to finish a carving he started there, and a stop in Idaho where he was still seeking a place to carve before winding up north of Berkeley, CA, where he hoped to do some carvings for friends there.

After seeing a children’s video about modern agriculture practices, Sudeith’s fascination with wheat farming and combines led him to . “It was impressive,” he said, “and I’m interested in foodstuffs. A big part of traditional petroglyphs is the menu, the food they were eating.”

He started planning the trip by asking everyone he knew if they knew anyone with land. “People referred me to other people,” he said. That search connected him with Diane Ekberg Arnold in , who recommended he come to Kenmare and introduce himself to Nelson.

Once he had a general idea of his schedule and route, he outfitted an old Dodge van to carry the tools and gear he needed for his project and headed west. He camped near Little Butte for a few days when he first arrived, then set up at a homestead site south of Bowbells on land owned by Nelson. “I plan on camping the whole way,” he said. “I like being outside.”

Even when being outside meant dousing himself in insect spray as protection against the ticks and mosquitoes, or fighting the prairie wind, or finding boulders on the prairie suitable for his working space. The frequent spring and summer rain showers, however, proved helpful by minimizing the dust.

Although some of the natural elements presented problems, area residents made him feel welcome. “People have been very hospitable,” he said. “The invitations to dinner and coffee, that’s a cultural thing I really appreciate. Hospitality is an emblem of respect and good nature.”

He smiled as he described several responses to his project, which were expected to an extent. “People are bewildered,” he said. “There’s a certain pragmatism associated with farming. They question why I’m doing something that’s so remote. People seem to think it’s a little humorous.”

Sudeith wound up his time in Kenmare by the end of June as other obligations started to demand his attention, even though he could see further work he wanted to do on the petroglyph. “It’s been nice being here, ticks aside,” he said, adding that he hopes to return to Kenmare enroute to a project in within the next year or so.

“I’d like to come back and fill in a lot of this stuff,” he said as he showed the final photo taken of the new petroglyph. “I feel very fortunate to have the freedom to do this. I really just want to get out and carve!”