Local cemetery expert has recorded names and dates of 68,000 graves

Herb Schwede’s interest in cemeteries started a few years ago when he and his sister June Myers researched their own family tree. “Now, we have information back to the 1850s on where our family came from in Germany,” he said, “but the Aurelia Cemetery up here, that’s what I started out with.” More than 68,000 graves later, recorded in both his own computer files and at the Find A Grave website at www.findagrave.com, Schwede could be considered somewhat of an expert on the cemeteries of northwestern North Dakota. 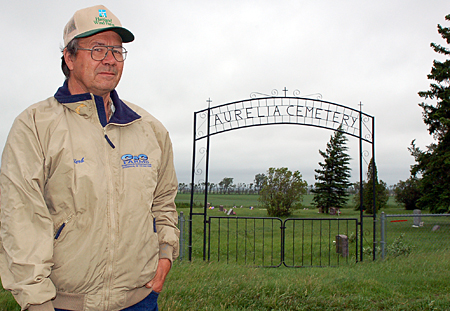 Keeper of the names . . . Herb Schwede has recorded
names and dates for over 68,000 graves found throughout
northwestern North Dakota and northeastern Montana,
starting with his family's tombstones in the old Aurelia Cemetery,
near Donnybrook. Schwede contributes the data to
findagrave.com, which features a searchable
database for cemetery information.