Rain keeps on as it brings seeding to a halt

Normally, farmers in this region welcome a little rain in May to nourish newly-seeded fields. Average rainfall for May, according to records kept at The Kenmare News office, comes in at about 2.10”. Add the five inches or so extra precipitation observed by some area producers during the last week of May, however, and those newly seeded fields turn back into sloughs and prairie potholes, a sight common in portions of northern Ward and Renville counties right now. 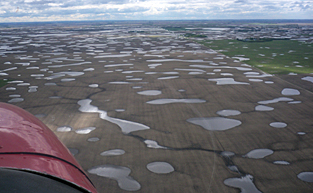 More than a few prairie potholes . . . An aerial view from
Julius Brekhus's plane last week shows the extent to which fields
flooded after townships north and east of Kenmare
received up to 7.5" of rain during the final week of May.
The section in the foreground and the CRP land to the right
are owned by Hartman Brekhus, with fields
owned by Jerry Overton in the background.

By Caroline Downs
Normally, farmers in this region welcome a little rain in May to nourish newly-seeded fields. Average rainfall for May, according to records kept at The Kenmare News office, comes in at about 2.10”.
Add the five inches or so extra precipitation observed by some area producers during the last week of May, however, and those newly seeded fields turn back into sloughs and prairie potholes, a sight common in portions of northern Ward and Renville counties right now.
“I’ve never had water like this,” said Ron Jensen, who farms in western Renville County. “Roger Jensen said in his 55 years of farming, he’s never seen ground like this.”
The North Dakota Agricultural Weather Network (NDAWN) sites at Bowbells and Mohall recorded precipitation at 3.67” and 3.62”, respectively, for the month of May, enough to soak the ground for the summer growing season. At the Bowbells NDAWN station, 2.25” of rain fell on six of seven days during the last week of the month, with 0.94” on May 28th. At the Mohall NDAWN station, the total for the last week was 2.62”, coming on five days, with 1.13” on May 28th.
However, rain amounts varied widely during the stormy pattern of the week, especially on May 28th. Farmers in townships north and east of Kenmare reported five to seven inches of moisture, as well as hail ranging from pea- to golf ball-sized, through that weekend.
Jerry Overton was called back from a family visit to Fergus Falls, MN. “We had four inches in one afternoon,” he said. “Our sewer was backed up in the basement bathroom. When you’re driving, you can’t see it all, but there are some fields that are about 30 percent underwater and some about 80 percent underwater.”
He and Ron Jensen, who farms fields adjacent to Overton’s, joked about the impact of the water on wildlife. “The ducks have Internet,” said Overton.
“Within an hour, you should have seen the birds--the ducks, the shorebirds, the seagulls,” added Jensen. “I’ve got wood ducks and canvasbacks out there.”
The rains came as some producers, like Overton and Jensen, had finished seeding, and others were still working.
Jerry Essler of Farmers Union Insurance in Kenmare estimated that about 40 percent of Ward County townships affected had not been seeded, while LoAyne Voigt, NDSU Extension Agent in Renville County, said about 20 to 25 percent of the acres affected there had not been seeded yet.
“When you drive around, you see how some areas are worse than others,” Essler said. “It’s been a frustrating spring for the farmers. They all want to seed that ground.”
Farmers who have unseeded acres face difficult decisions about their growing season as crop insurance deadlines come within the week, and those producers who managed to finish their fields are looking at a growing season with challenges. “My canola [seed] was pushed down another inch,” said Jensen.
“It’s not just what’s underwater, but also what’s washed out,” said Overton. “And it means more time in the field with the sprayer.”
He expressed concerns for his neighbors with unseeded ground. “This shifts expenses over, so the input cost is doubled for what you have left,” he said.
With producers looking at immediate concerns, Voigt said her office has focused on education. “Our biggest goal at this point is to help minimize the problems as a result of all this moisture accumulation,” she said. “With the extra moisture come much higher disease concerns and different weed and insect concerns.”
In fact, during a chemical meeting at the Renville Elevator Company last Thursday, Jeremy Peterson and Dan Waldstein of the NDSU North Central Research Extension Center in Minot listed some of the specific problems that could be associated with the abundant rainfall, including tan spot, cutworms, and increased aphid activity in barley and peas.
“The producers need to continue to monitor their seeded fields,” Voigt said, “especially for more disease and more insects.”
During a flight with pilot Julius Brekhus, Jensen photographed the water-logged fields to better document the problem for insurance agents and county and state emergency management officials. Late spring rains have continued to fall, with 0.33” recorded at the Mohall NDAWN site and 0.53” at the Bowbells site as of June 6th. The coming week’s forecast also includes chances for showers and thunderstorms.
Jensen and Overton laughed as they described a prairie trail that runs between their property. Both men occasionally drive the tracks while farming, but a section of the route is now underwater in a giant slough that connects two formerly small wetlands in each field.
“I wanted waterfront property, and now I’ve got it,” Jensen said. “Humor is the only thing you can do with this. You can’t prevent it and you can’t stop it!”
Prev Next