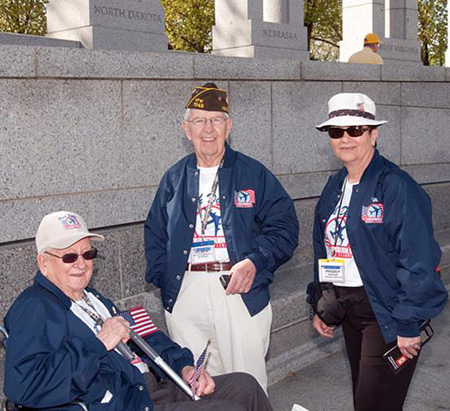 First veterans, now Roughriders . . . Marvin Gravesen, left,
Gil Rauschenberger, center, and a volunteer with the Roughrider Honor
Flight pause for a moment at the North Dakota pillar of the
World War II Memorial in Washington, D.C.  Gravesen and Rauschenberger
were among the 90 WWII veterans from North Dakota who were treated
to a two-day trip to see the Memorial and other sights in Washington, D.C.,
as part of the Roughrider Honor Flight from Bismarck in April.

By Caroline Downs
Former Kenmare residents, Marvin Gravesen and Gil Rauschenberger, stood among 90 World War II veterans from North Dakota gazing at the fountains and pillars of the World War II Memorial in Washington, D.C. on a lovely April day.
It was a sight neither had ever expected to see. The two men and the other veterans traveled there courtesy of the Roughrider Honor Flight on April 16th and 17th, grateful for the opportunity.
“It’s really something. It’s huge!” said Gravesen. “There were also veterans from Michigan and Wisconsin while we were there.”
Rauschenberger was impressed with the design and size of the Memorial, as well as the response from other visitors. “There were many civilians there on vacation,” he said. “They’d come up to you and shake your hand and give you a hug.”
The two men visited Washington, D.C., with the third Roughrider Honor Flight from Bismarck, which also sponsored veterans’ groups in May and September 2009. Veterans travel free of charge, with volunteer doctors, nurses and some family members joining them to provide assistance as needed.
Gravesen applied for the Honor Flight with the encouragement of his daughter and son-in-law, Linda and Jim Potter of Kenmare. “I was a little bit leery of going,” he said, describing how he wasn’t certain he could do all the walking. “But they had nurses and doctors aboard, and a lot of wheelchairs, so I used one. And there were people available to help push!”
One of those people was his old friend Rauschenberger, who wheeled Gravesen’s chair around many stops on the trip. “I was so glad there was somebody else there from Kenmare,” said Rauschenberger. “We got along just fine. Nobody was in any big rush to get anywhere.”
Rauschenberger was encouraged by his family to join the flight, so he completed the application. A few weeks later, he was pleased to attend the group’s meeting at the state capitol building to receive his official Roughrider Honor Flight cap, T-shirt and jacket. “Whoever’s idea this was, we’ll all be very thankful for that,” he said, agreeing with Gravesen that the plans and details for the trip were fabulous.
“They’re trying to get as many veterans down there as they can,” Gravesen said, “to see the World War II Memorial.”
Gravesen with
the 10th Armored Division
Gravesen and Rauschenberger did not know each other during the war years, but they both served in Europe and saw action at the close of the war.
Gravesen was drafted in October 1942. “They came after me,” he said, with a slight smile. “I had my 21st birthday in the service.”
He was assigned to the 10th Armored Division in the U.S. Army, trained at Fort Benning, Georgia, and serving under General Patton in the Third Army across Europe. 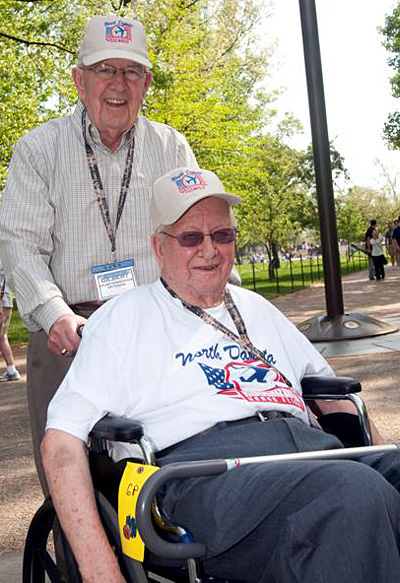