The sound of student voices in the hallways and classrooms at Kenmare High School has given way to the buzz and pound of power tools for the summer. 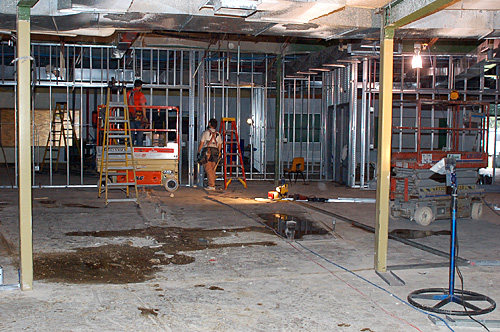 Construction is underway on walls in the area
of the elementary classrooms on the east side
of the Kenmare High School building.

The sound of student voices in the hallways and classrooms at Kenmare High School has given way to the buzz and pound of power tools for the summer.
Renovation plans are becoming reality in the building, with old carpets and ceiling tiles hauled away and new classrooms quickly taking shape under the hands of skilled crews.
“In the short time they’ve been here, they’ve accomplished quite a bit,” said Kenmare school superintendent Duane Mueller.
In fact, demolition of the targeted area at the high school started the day after graduation. Teachers spent their spare moments during the final weeks of class packing, with the labeled boxes moved to other parts of the building for storage. Mueller described efforts on the last day of school, as several FFA members joined teachers to shift the remaining loads to pallets which were hauled to the multi-purpose building for the summer. “We worked from about 9 am until 12:30 pm or so,” Mueller said. “The kids just pitched in.”
Their efforts proved fruitful, as the contractors and their crews arrived May 24th to launch major demolition efforts. According to Mueller, by the next afternoon, much of the Phase I area was cleared and ready for new walls.
Old carpet in some areas, that had to be soaked with water and pulled up in strips, and the bathrooms slowed progress to an extent, but Mueller said all the demolition for the Phase I portion should be completed by the end of this week. In fact, many of those classrooms will be framed by that time, with the crews starting to hang sheetrock.
Demolition of the Phase II classrooms, including the two science rooms, will continue through the next week.
Steel 2x4s clearly delineate new permanent walls for the interior and exterior classrooms, separated by the open corridor. Mueller pointed out where four-foot lockers, ordered for the 4th, 5th and 6th grade classrooms, will be built into the walls of the hallway and topped with a shelf for additional storage. The young Honkers will have maroon and gold lockers to match those of the upperclassmen, but the elementary lockers will now be separated from those of the older students.
That change will be one of many for both students and teachers by the time the project is completed this fall. “The first day of school will be a true ‘first day of school’ in this building,” said Mueller.
He explained that 10 classrooms are necessary to accommodate the high school schedule, with three classrooms needed for the elementary grades. As construction rolls along and rooms are finished, the classrooms will be set up for use, although some high school teachers may be shifted around as Phase II of the project comes to an end. “By the end of the first quarter, we should be settled in,” he said.
While teachers have been catching a glimpse of the progress while at the school for other meetings this summer, students will have their first view of the changes during registration in early August.
Mueller and high school principal Scott Faul are planning an open house on August 19th, the day before school starts, so kids and their parents can tour of the transformed building. “Once the project is completely finished, we’ll have another open house for the public,” Mueller added.
He was optimistic about the progress made by contractors so far, as the floor plans he and the school board members studied and reviewed for so many months take on a three-dimensional appearance.
“It’s going to be neat to see this come together,” he said. “I think it will be something everybody can be proud of.” 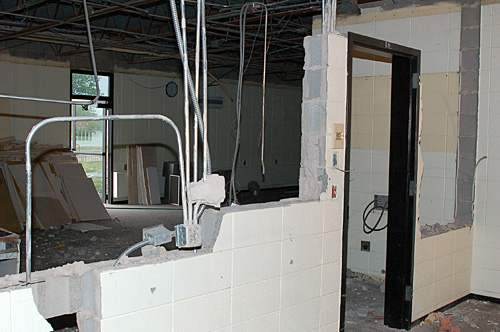 The old walls come down . . . The door frame and a portion of the wall
for the former home economics classroom at Kenmare High School
still stand on June 10th, but demolition crews are hard at work to
clear the walls, floors and ceiling for new construction. This area is
included in Phase I of the project and will be remodeled into
two classrooms separated by permanent walls.
Prev Next