Meet up with Lewis & Clark-Berthold high school principal and athletic director Peggy Person and she’ll first ask how she can assist you at her school. Then she may talk about a particular classroom or program or activity where students, teachers and coaches are seeing improvement and success. 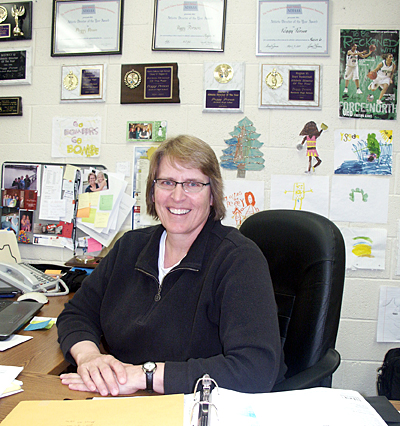 Meet up with Lewis & Clark-Berthold high school principal and athletic director Peggy Person and she’ll first ask how she can assist you at her school. Then she may talk about a particular classroom or program or activity where students, teachers and coaches are seeing improvement and success.

She rarely talks about herself, but her actions say plenty about her character, her work and her leadership abilities, and those qualities were recently recognized by the North Dakota Interscholastic Athletic Administrators Association when that group named Person as the 2009-2010 Athletic Administrator of the Year for the state.

“I do not believe I do anything differently than anybody else who has a similar position,” Person said, adding that she respects her colleagues around the state and enjoys the opportunities they have to meet and work together. “This award is nice, though, because it comes from your peers. It’s humbling, because they know you and appreciate what you do.”

You have to look hard in Person’s office to actually see the award she received. She does have the plaque out of the box, perched on one corner of her desk, along with papers for the upcoming graduation ceremony, student files that need some attention, phone messages to return, her contract to be signed for next school year, and a handful of other projects still to be completed.

The wall behind her is decorated with a few other plaques for various honors she has received during her career as an administrator and a couple of newspaper articles about Lewis & Clark-Berthold students, but most of the space is filled with pictures drawn by her niece Sailor Blahut, who is finishing first grade. “This is more important to me,” she said as she pointed out details in the drawings.

Person is a graduate of Valley City State College, with bachelor’s degrees in both business administration and business education. She left to teach in , for 14 years, where she also coached junior high volleyball, girls basketball and boys and girls track and assisted with the volleyball and girls basketball programs at the high school.

She earned a master’s degree in educational leadership from at , , in 1998 and taught one more year in before accepting the high school principal position at . “The AD title came with this job,” she said.

Person has coached in Berthold, too, serving as the assistant girls basketball coach for two years and helping with the volleyball and track programs when coaches needed her. In regard to school sports, she has devoted herself primarily to the AD job, and recently became a Certified Athletic Administrator after taking the required courses, making presentations and completing a national exam.

“It’s an affirmation of the education you have, going beyond the bachelor’s and master’s degrees,” she said. “In the state, there are more of us getting certified and the NDIAAA encourages that. I think it’s important we continue our education.”

Person has discovered some aspects of the AD role are relatively simple. “Scheduling games, scheduling officials, setting up for games, getting workers, making sure the facilities are ready for use, taking part in hiring coaches,” she said, listing the more visible parts of the job and then emphasizing how communication with other people involved is important.

She learned that her presence at events as the AD makes an impact. “You can’t do this job without dedicating time,” she said. “I can’t imagine there being an activity going on here and me not being here. In the last 11 years, there have been very few times that I’ve missed. It’s hard not to be here!”

Person believes the students respond to her role as the AD. “We’ve had coaches who are not on staff [at our school], so then I’m the contact,” she said. “A lot of these kids we have participating [in activities] now were in elementary school when I started, and I think kids really notice when you’re there. They see you announcing or sweeping the floor. Sometimes you make one comment to them about one little thing they’ve done, and they notice.”

The Berthold Bombers show their appreciation for Person’s work as the AD. She laughed as she pointed to a jacket she just received that commemorates the boys basketball team for being the runners-up in the 2010 Class B tournament.

She also told the story from two years ago of being invited by three junior high boys to enter as a team in Kenmare’s GooseFest Golf Tournament. “You can’t turn that down,” Person said. Their team even placed in the event.

Person honestly enjoys her role as AD and the time she spends at the students’ activities. “It was a natural transition after coaching,” she said, “and a way to continue to be involved.”

She likes watching the growth of the student athletes, in any sport, and seeing quality coaches take their time to mentor kids and share life lessons.

Of course, with the number of students, parents and community members interested in student athletics, Person faces challenges, too. “There are many opinions about how to do things and how things should be done,” she said. “When the varying opinions go different directions, when they’re not all mindful of getting to the same place, that’s the most difficult thing.”

Person certainly respects the variety of opinions she hears from people, but she gets concerned about the way those opinions are voiced at times. “It affects the kids when there’s negativity,” she said.

She admits to acting with less-than-stellar sportsmanship in her early days of coaching. “I’ve mellowed now,” she said with a smile. “I’m competitive, but my perspective on the purpose of athletics has changed a great deal. The officials, the kids, the coaches out there, they have no interest in doing a bad job!”

She projected the behavior of some fans from the bleachers at the court to the classroom. “Can you imagine what would happen if you had bleachers in the classroom?” she said, using math problems as an example. “There would be people sitting there shouting, ‘Come on! Carry the one! Can’t you do it right? Carry the one!!!’”

Although Person laughed at the image, she was serious about the way athletics and team sports impact a student’s life. “Kids can develop character in athletics and activities,” she said, “and hopefully there’s a direct relationship between the effort and the reward.”

However, the first priority of schools for Person is to educate students, not turn them into football or basketball stars. “These are games our kids play,” she said. “The activities are important, but they’re not everything.”

Person talked specifically about those circumstances with the 2009-2010 Bombers boys basketball team as they played through their season, learned about the cancer diagnosis of one of their former teachers and a player’s mother, and earned their way to the state championship. “I felt like they were getting frustrated at one point and I asked Coach Teets if I could visit with them,” she said, adding that she asked them about pressure and found out they felt burdened with expectations. “I told them you don’t have to carry the weight of the community on your shoulders. This is fun.”

She continued, “These are lessons you can’t necessarily do in the classroom, but you can do in athletics and activities. The kids all need to be reminded: ‘The talent is there, but we’re just watching you do your thing. There’s other stuff that’s more important.’”

Person is quick to credit the school’s successful athletic programs and high participation to the coaches who work with the Berthold athletes and the teachers who support the students both in the classrooms and in their sports endeavors.

Of course, she also points to the students themselves as an important component of her job as AD. “When you see the kids and their success, it’s about what the kids have done,” she said. “I’m just hanging on their shirttails!”