Things look a little more stable and square at Kenmare’s Pioneer Village these days, following some foundation work done early in May for the Niobe Hall and the Bintz House. 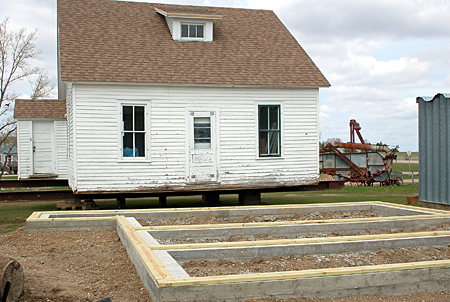 Moving to a firm foundation . . . The Bintz House at Kenmare's
Pioneer Village waits to be returned to its location on a new concrete
foundation finished in May.  The foundation under the Niobe Hall
was also replaced, and several other projects are underway
at the Village, now open for the summer season.

By Caroline Downs
Things look a little more stable and square at Kenmare’s Pioneer Village these days, following some foundation work done early in May for the Niobe Hall and the Bintz House.
The projects were scheduled under the grant the Lake County Historical Society received earlier this year from the State Historical Society of North Dakota. Fat Boys Construction built the foundations with concrete from Sandberg Redi-Mix and gravel for fill delivered by Harris Construction.
Lake County Historical Society president Bryan Quigley was pleased to see both buildings returned to firm foundations, especially after rotting plates were discovered under the two buildings. “Fat Boys Construction had to replace all the plates on the Bintz House and do a partial replacement of the Niobe Hall plates,” he said. “The Bintz House had sunk in the dirt enough that major problems were only a year or so away.”
He praised the Happy House Movers of Bottineau for their careful work in moving the two buildings and returning them to the foundations. “They had some difficulty given the rotten plates, but they did a good job,” he said, adding that the movers had to pull in the north wall of the Niobe Hall and brace it accordingly. “That’s straight now.”
Before the move, volunteers packed the glass items on exhibit in the Niobe Hall. “We left most everything else to take the ride,” said Quigley, “and we had no damage to any of the items.”
Visitors at Pioneer Village may see more construction underway in the next few weeks, with the Fat Boys Construction crew returning to rebuild the boardwalks to both of the buildings that were moved, install a stairway to the back door of the Niobe Hall and finish coating the Norma Hall with linseed oil. “We could not get to the peaks,” Quigley said. “Thus, we asked the professionals to finish the high work!”
Members of the Kenmare FFA chapter donated their time and labor to Pioneer Village during the annual spring work day held May 8th, painting 38 gallons of linseed oil on the lower portions of the Norma Hall, the grain cleaning building and the front of the storage building.
“We had about 23 people there throughout the day,” Quigley said about the work day. “The FFA will give us one more day in June sometime.”
Changes to the Bintz House will be extensive this summer, with a major interior renovation. “The upstairs is done and many items from the main floor were stored up on the second floor,” said Quigley. “We have to sheet rock, mud and tape the main floor. Barry Christensen is doing the inside work for us.”
The Shepherd’s Shack has been completely restored by Rick Logren and moved back to the Village, and Tahnee King cleaned the leather on the Otto Mickelson buggy and returned it for display at the Niobe Hall.
Other projects finished at the Pioneer Village this spring include new ramps and decks for the Cook Car and the back of the steel building. Repairs have been completed at the Harness Shop and that building is ready to be painted. Don Harris has been replacing rotted flooring in the old Bank at the Village.
“Don has also volunteered to do some odd jobs around the Village in the next few weeks,” Quigley said. “We need help. Cleaning the buildings and preparing the displays is a top priority. We would love for families or individuals to take on one or two buildings for a good spring cleaning, and I promise not to harass them the remainder of the summer!”
Quigley estimated a cost of $28,000 for projects planned at the Village this summer, with $14,000 paid from the State Historical Society grant.
The Pioneer Village opened for the summer season on Memorial Day. Regular hours for tours are from 3 to 7 pm on Wednesdays, Thursdays and Fridays, and 2 to 5 pm every Saturday and Sunday, although the schedule may change because of weather conditions.
On July 11th, the Lake County Historical Society will host the fifth annual Pioneer Day at the Village from 3 to 8 pm, with games, music, a log cutting contest, a pig roast feed, a one-act play performance and more. Everyone is welcome to attend this popular event!
Village tours can be arranged for individuals or groups by calling Arnold Mickelsen at 701-385-4485, Barb Mickelsen at 385-4478, Cindy Rytter (after June) at 385-4248, or Quigley at 701-467-3444.
Prev Next