Members of the Kenmare Fire Department threw open the doors to their new fire hall on Saturday to host an open house event that attracted a couple hundred guests. 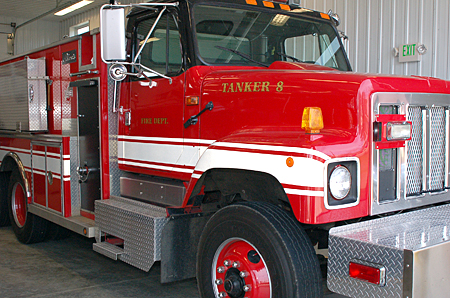 Tanker 8 . . . The newest vehicle in the Kenmare Fire Department's fleet
stands ready to roll from the fifth truck bay at the new fire hall.  Tanker 8,
purchased used from the Andover, MN, Fire Department, can transport
2,500 gallons of water for use on rural fire calls.

By Caroline Downs
Members of the Kenmare Fire Department threw open the doors to their new fire hall on Saturday to host an open house event that attracted a couple hundred guests.
The trucks gleamed and the floors sparkled as visitors from Kenmare, Donnybrook, Mohall, Minot, Bowbells and even Glasgow, Montana, wandered the hall, sipping beverages and munching on cookies and other treats. They admired the collection of photos showing the department’s history and inspected the new building and marveled at the arrangement of vehicles and equipment, once crammed into the facility at the Memorial Hall.
Volunteers with the Kenmare Fire Department rolled the red carpet for the day, offering tours and sharing several door prize drawings and free “File of Life” kits with everyone who attended. The truck bay area was one popular gathering place for the afternoon, but the kitchen and meeting room also drew a fair number of guests as members of the auxiliary served cake and kept the coffee cups filled.
Chuck Leet, secretary-treasurer of the Kenmare Fire Department, noted several special guests during the afternoon, including Kenmare mayor Roger Ness and city auditor Mary Brekhus, representatives from the Mohall Fire Department, Columbus Fire Department and Des Lacs Fire Department, and Shelly Weppler, executive director of the St. Joseph’s Community Health Foundation in Minot.
Weppler was impressed with the department’s request for visitors to “fill the boots” in order to work toward raising the $10,000 needed for a matching grant of $10,000 from the Foundation. Contributions of $100 or more made out to the St. Joseph’s Community Health Foundation for the Kenmare Fire Department will be applied toward the grant, and Leet reported $1800 contributed on Saturday. “That’ll turn into $3600,” he said.
Donations for the matching grant can be sent to the Foundation in Minot or given directly to any Kenmare firefighter.
Congressman Earl Pomeroy and U.S. Senators Kent Conrad and Byron Dorgan sent their congratulations for the event. North Dakota Governor John Hoeven phoned his best wishes for the day, as did District 6 Senator David O’Connell and Representative Bob Hunskor.
Leet was pleased to see so many area residents taking time to view and discuss the collection of department photos now exhibited in the meeting room. “When people come to town, they can look at those pictures, and look for their dads and their grandpas,” he said. “There’s a lot of history behind this department.
He noted the firefighters are already planning another community gathering later this fall, with a more formal program to officially dedicate the fire hall.
Tanker 8
Saturday’s guests got an eyeful of the used 2,500 gallon tanker truck that joined the Kenmare fleet two weeks ago. The tanker was purchased from the Andover, Minnesota, Fire Department, thanks to Jon Holmes of the neighboring Anoka-Champlin Fire Department and a dedicated GooseFest hunter.
Holmes visits Kenmare for the waterfowl hunting each fall and has befriended several firefighters over the years. He was aware of interest from the Kenmare Rural Fire District in buying a used tanker, so when the Andover department was ready to sell theirs, Holmes called his friends in Kenmare.
Mitch Duerre and Trevor Melin made the trip to Andover as Hank Bodmer’s passengers on a flight donated for the fire department. Duerre said Holmes and his daughter met the two at the airport. “He took the day off from work to drive us around down there,” said Duerre.
Melin noted that Holmes and some of his friends followed the progress of Kenmare’s new fire hall on a regular basis. “The guys from Anoka check the Internet all the time for The Kenmare News,” he said.
The 1991 tanker, which cost $88,000 new, was sold to the Kenmare Rural Fire District for $22,500. “They just rebuilt the pump last year,” Duerre said. “It’s basically a brand new truck, just broke in!”
Duerre and Melin were surprised when they saw the excellent condition of the tanker. “We had pictures, but when we got there we could see how nice it really was,” said Duerre. The Anoka-Champlin department also loaded the tanker with an exhaust fan, some hydraulic hoses for extraction equipment and a variety of loose tools for the Kenmare department.
The two Kenmare firefighters shared supper with the Anoka-Champlin crew and saw first-hand how busy the department was as the pagers went off during the meal. “They average 700 to 800 calls a year,” said Duerre. “There are about 60,000 people living in the area.”
He and Melin started the drive back to Kenmare the next morning. “They left it about three-quarters full of water so it didn’t bounce,” Melin said. “It handled well.”
The tanker will be used for grass and structure fires on rural calls. “It’s mainly to provide more water capacity in the country,” Duerre explained. “We can set up the portable tank, dump our load of water and head back for more. This tanker is also a pumper, so we can work directly from there, too.”
Any member of the Kenmare department can drive the tanker, and all volunteers will be trained to operate the unit.
Melin and Duerre said Holmes’s assistance to the Kenmare department in buying the tanker was invaluable. “And he just shrugged his shoulders about it,” said Duerre. “He enjoys coming up here hunting, and all the hospitality. He just wanted to help us out.”
The new tanker made its first run with the Kenmare department Sunday afternoon when a call came in reporting a grass fire on land owned by Steve Bauer.
Prev Next