Ralph Hoversten, the new executive director of the Kenmare Community Development Corporation, was born and raised in Minnesota’s Twin Cities, but his heart belongs in the country. 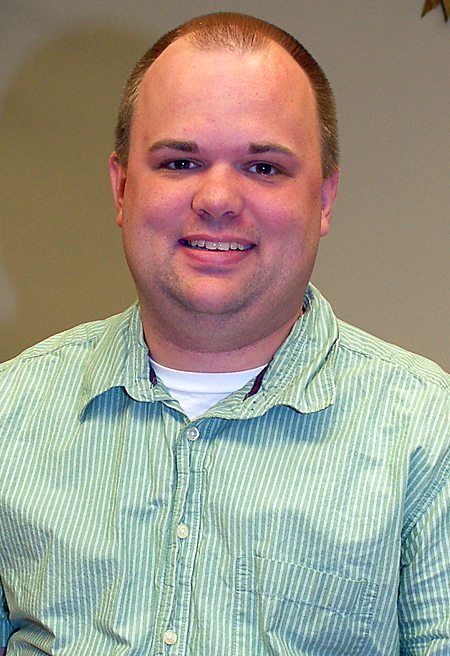 Ralph Hoversten, the new executive director of the Kenmare Community Development Corporation, was born and raised in ’s Twin Cities, but his heart belongs in the country.

During pheasant hunting trips to rural as a teenager, he used to tell his grandfather he wanted to live on the prairies and farmlands someday. “My grandpa thought I was nuts,” he said. “I still go back to the Cities and visit, but I’m a convert to the rural life.”

The conversion to rural life also means a commitment from Hoversten to the lifestyle and prosperity of rural communities. He is a 2003 graduate of the University of North Dakota, where he earned a bachelor of science in geography with an emphasis on urban planning.

“Because this was at UND, we also learned about the small town aspect,” he said. “There was more of a focus on the smaller towns in the state. The same principles of planning apply to small towns as to large towns.”

After receiving his degree, he worked first for a firm in to map highways and then for a new telephone company in where he assisted in planning fiber optics routes and operations in rural areas.

From May 2008 until December 2009, he served as the director of the Divide County JDA in . “That was almost of mirror of this job,” he said, referring to his new position in Kenmare. He cited involvement in a community daycare operation, a housing project, and the merger between the hospital and clinic in . Through his experiences there, he learned he preferred interaction with people rather than maps.

“I like working with business leaders, community leaders, trying to make the community a better place to live,” he said. “You think about why a family would pick Kenmare over Mohall or Bottineau or Stanley. It’s about the enhancement of a quality of life.”

Several of Kenmare’s characteristics raised his interest in the position here. “The town seems progressive and has a certain charm with the lake, the hills and the refuge,” he said. “It looks like it has a lot to offer for families, businesses and tourism, and there’s confluence of different economic factors that can make the town strong in the future.”

One of his first plans, along with setting up his office and introducing himself to the business owners around town, is to establish even more of an online presence for Kenmare with Facebook and Twitter. “It’s one more outlet to get information out to people,” he said. “This is [the direction] things are going, and it makes your town look more modern.”

Among his duties, Hoversten will attend meetings for several organizations on a regular basis, including sessions for the Kenmare city council and school board, Association of Commerce, and the Kenmare Community Development Corporation (KCDC).

He is interested in developing ideas to establish an industrial park for new businesses, especially those related to oil and wind energy activity, seeking to locate in Kenmare. “They want space that’s ready-made, or they’ll go on to ,” he said.

He intends to continue working on and complete a long-range strategic plan for Kenmare that actually started with the former KCDC executive director Kari Bies, and he will often serve as the face of the KCDC at local, statewide and regional events.

“I want to try to get a pulse of what’s going on in the town,” he said, adding that he looks forward to meeting his neighbors and other local residents. “I’ll be a member of the community as well as working for the community.”

When he’s not planning with community leaders or working on financial options to launch a new business in town, Hoversten may be found stretching his legs with a long walk. “I love walking, especially March through November,” he said. He admitted he has been known to simply park his vehicle and walk to appointments and commitments.

He confessed an interest in watching professional sports, especially baseball, hockey and football, and said he could possibly be persuaded to join a softball team. His three children, ages 9, 6 and 3 who live in , will be frequent weekend visitors in Kenmare. Hoversten also described himself as something of a news junkie who tracks the state and local trends and economic reports even when he’s not officially on the clock.

Hoversten has an office at the Kenmare Memorial Hall, next to the police department, and will be available Monday through Friday from 8 am until 5 pm, except for the noon hour. He can also be reached by email at rhoversten@restel.net or by phone at 701-848-6040.

“Anyone who is interested in a business opportunity or has an idea to enhance Kenmare, please stop in!” he said. “I’m going to work as hard as I can for this community.”