Bookmobile set out on maiden voyage to Kenmare 50 years ago

Loaded with books and other items to go for residents of Ward and Mountrail counties, the Ward County Public Library Bookmobile is marking 50 years on the road this month. 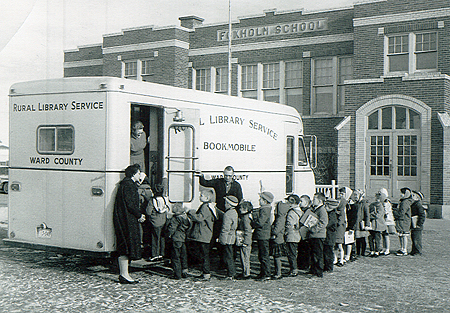 The current bookmobile, serving patrons in
Ward and Mountrail counties since 1996.

Loaded with books and other items to go for residents of Ward and Mountrail counties, the Ward County Public Library Bookmobile is marking 50 years on the road this month.

And bookmobile patrons on all the routes have the opportunity to celebrate with library staff this month. In fact, the party started with an open house at the facility on Monday.

On April 26th, the bookmobile 50-year event culminates with a full schedule at Kenmare. The bookmobile will start its day at the Baptist Home of Kenmare, then park at both schools to host students in grades kindergarten through six for their annual spring visit.

The party will end with an open house for all local patrons and residents from 2 to 4 pm, outside the Kenmare Branch Library. "We want to keep our patrons happy," Burkhart said, "and show them we appreciate them!"

The bookmobile hit the highways and byways in April 1960, with Kenmare as its first destination. In October of the previous year, 51 percent of voters living outside the city of signed a petition to express their support for establishing a public library service for residents.

The Ward County Commissioners agreed to a two mill levy to fund the endeavor and by November, the first Ward County Library Board of Trustees meeting was held with members Paul Walker of Kenmare, chairman, Nellie Erickson of Minot, vice-chairman, Irene Anderson of Glenburn, secretary, Mrs. Everett Finken of Douglas, and Glen Dolan of Kenmare.

In those days, the group shared space for an administrative office and book storage at the Minot Public Library building. By April, the board launched the traveling library service with a $32,000 grant and a bookmobile from the federal Aid to Libraries Act. Mr. and Mrs. Leo Beyer operated the bookmobile, and Mrs. Lois Ronning served as the first county librarian.

The bookmobile’s maiden voyage took it to Kenmare on April 9, 1960, where students Pauline Ringen and Mary Lynn Johnson were the first two patrons to borrow books. Records show that 2,796 books were circulated to 2,600 people in the first 13 days of the bookmobile’s operation. Within that period, the bookmobile made 32 stops and covered 1,013 miles as it shared the 2,860 books owned by the county library.

By November 1960, only a year after the initial petition was presented to the county commissioners, the library owned 5,353 books and served 3,322 patrons.

The bookmobile’s presence led to the creation of the Ward County Library Room at the Minot City Library in September 1966. Ten years later, the bookmobile was so popular in Kenmare that local residents supported a two mill city levy to establish a permanent branch library in town. Ward County Public Library wouldn’t get its own building for another seven years, when the building at in was obtained in 1983.

Readers in watched the bookmobile services with great interest and voiced their wishes to join the fun. In 1983, contracted with Ward County Public Library for bookmobile services, an arrangement that continues to enjoy success and share library materials.

The bookmobile’s influence on the county library system, and patronage of the bookmobile and the two libraries, has grown over the decades. By the end of 2009, library records showed that the bookmobile made 43 stops each month and traveled an average of 1,200 miles in a month.

Now serving 10,167 readers in Ward and Mountrail counties, Ward County Public Library and its bookmobile own 51,326 books. Total circulation for 2009 was over 80,000 materials.

That first bookmobile has since been replaced--three times in fact. “The Prairie Runner,” painted blue and white, was purchased in 1971 and used until 1981. Then, readers came to expect the red and white International bookmobile with the logo “Books...and other good things!” painted across the side.

The current bookmobile, another International, was purchased new in 1996 and is affectionately known to library employees as “Bernice.” The “Books...and other good things!” logo has been maintained, painted above the bold rainbow stripes that decorate the sides of the white vehicle. Phyllis Buechler drives the bookmobile these days, assisted by Michelle Demchuk. Both women were hired in 2008.

The library board still includes a Kenmare member, with Shirley Lindquist serving as secretary. Other members are Ron Neshem of Berthold, president, Linda Anderson of Douglas, vice-president, Muriel Peterson of Ryder, and Carroll Erickson of Minot, Ward County Commissioner.

And one of those first girls to borrow a book from the bookmobile, Pauline (Ringen) Nielsen, continued her association with the Ward County Public Library after she took a job at the Kenmare Branch Library in 1980. She still works there as the local librarian and is well known for encouraging Kenmare kids to visit the bookmobile when it stops in town for special occasions.

Burkhart is quick to credit the bookmobile’s success through the decades with the vision and support of the library’s board of directors. “We have had such fantastic board members,” she said, adding that some individuals take a direct approach to the library’s operations. “They come in to see what needs to be done in the library!”

She emphasized the role the patrons have played over the years, with enthusiasm for the bookmobile continuing to run high. She smiled as she talked about the various stops and the responses from readers waiting there. “We stop at ’s Corner once a month, and they come with bagfuls [of books]!” she said. “It’s nothing for them to check out 20 or 30 books per month for a family.”

Generally, five or six cars await the bookmobile’s arrival there, and when the patrons finish borrowing new materials, they meet for coffee. “They keep us hopping and make requests. I love it when they ask for books!” said Burkhart, adding the library fulfills those requests through purchases and interlibrary loan services.

Several schools remain on the bookmobile’s monthly itinerary. “We don’t want to take over their libraries,” Burkhart said. “Most schools have at least a small library, but we are there just to supplement what they have. At those stops, the kids are waiting and excited to see us!”

The bookmobile is also a welcome visitor at four nursing homes in the area, making two stops each month at Edgewood Vista and The View, and one monthly stop at the Mountrail Bethel Home in and the in Parshall. “Not all the patrons are able to come out to the bookmobile, but we take the books in to them,” said Burkhart. “We have a lot of older patrons. They love to read and we want to help them in any way possible.”

The Edgewood Vista stop holds a special place in Burkhart’s heart, and not just because the activities director greets the bookmobile librarians with treats. “We have one lady there who is a reader,” said Burkhart. “She’ll read ten books a week or more! I keep trying to find new books and new authors for her.”

Through all the years, on the road most Mondays through Thursdays, the bookmobile has generally kept its schedule, canceling stops only occasionally because of poor weather or road conditions. “We’ve got some really good patrons, who are very understanding about weather problems,” said Burkhart.

And the bookmobile’s only breakdown, to Burkhart’s knowledge, occurred in early February. “That was in , and we had to be towed back to ,” she said.

With 50 years of library history, the Ward County Public Library and the bookmobile are looking ahead to a busy future. Burkhart said the regular schedule will not change and patrons can continue to depend on the bookmobile to deliver books, videotapes, magazines and periodicals, DVDs, music CDs, audio books on tape and CD, graphic novels and more.

At the libraries in Kenmare and Minot, the public has free access to the Internet on 10 computers, as well as fax and copy machines. Patrons can make use of interlibrary loan services through the State Library, and kids can enjoy the summer reading programs and year-round story hours offered. Ward County Public Library also maintains book collections at Senior Citizens Centers in Kenmare, , Carpio and Makoti, as well as the Ward County Jail and the .

Anyone with further questions about the Ward County Public Library or the bookmobile is welcome to visit the library’s website at www.co.ward.nd.us/library or send an email message to library@co.ward.nd.us. Burkhart can also be reached by phone at 701-852-5388 or toll-free at 1-800-932-8932.

The Kenmare Branch Library is open Mondays from 10 to 7 pm and Wednesdays and Thursdays from 10 am until 5 pm. Librarian Pauline Nielsen can be contacted there at 701-385-4090.

A new bookmobile purchase is on the horizon. “She’s showing her age right now,” said Burkhart. “Little things keep going wrong. There is a fund in part of our budget for a new bookmobile, and we’re getting closer to the amount we need.” Several factors will be considered for a new bookmobile, including handicapped accessibility, shelving components and desks for the librarians and their computer.

In the meantime, Burkhart is asking patrons to join the Ward County Public Library’s 50-year celebration, along the bookmobile route and especially in the Kenmare area, where readers first encouraged community and county leaders to establish and fund a library system.

“Join us for the open house in Kenmare on April 26th,” said Burkhart. “There will be cake and coffee, photos and stories from the bookmobile. You can come out and tour the bookmobile if you’ve never had a chance. We’d love to you step on!”