Jay Brown chosen as Caregiver of the Year

Jay Brown of Berthold is somebody pretty special. 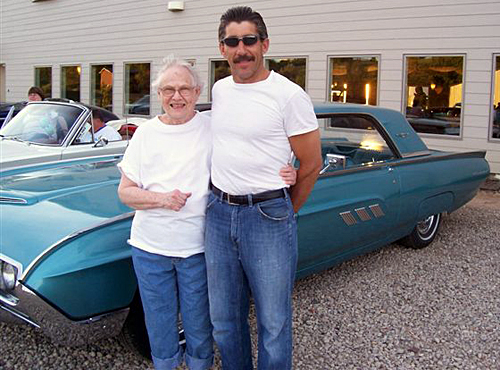 Caregiver of the Year . . . Jay Brown of Berthold has a special
relationship with the resident of The View in Minot, where he works.
Above, he poses with Ann Wolf during an exhibit of vintage cars
by the Dakota Cruisers held at The View.

Jay Brown of Berthold is somebody pretty special.

At least, that’s what the 68 residents of The View, an assisted-living facility for seniors in , seemed to think when they entered his name for one of the annual North Dakota Caregiver of the Year awards presented by the North Dakota Long Term Care Association.

“They must have written something good about me!” Brown said, laughing as he described his feelings about being selected as one of three people to receive the award, out of over 400 nominations received across the state.

Brown does maintenance work at The View, where he has worked since July of 2005. His brother-in-law Gaylin Schmidt of invited him to work for the facility. “I’ve been there since it was dreamed up,” Brown said. “The environment is great, so uplifting, being around the residents all the time. They just appreciate it so much, and I’ve gotten so close to them.”

Brown was employed by Western Builders in Berthold earlier. The change to maintenance and groundskeeping responsibilities at The View was his first experience in working with senior residents, but he appreciates his relationship with them. “Someday, we’re going to be where they’re at now, so you want to make them as happy as you can,” he said. “It’s fun being around them, and I have no regrets about the change.”

He laughed again as he talked about the concern residents showed on days when he had to remove snow from the building’s sidewalks and parking area. “The residents feel sorry for you when they see you working outside,” he said, adding he has never missed a day of work because of poor weather or road conditions, although he had to wait one morning until U.S. Highway 2 opened to traffic.

Keeping the building accessible and safe for the residents is one of his top priorities. “I told them I had to be here,” he said, “to make sure everything is taken care of.”

Another priority is to keep residents at The View busy with some of their favorite activities, and Brown often participates. “I fill in playing pinochle when they need me, or pool,” he said. “Pool, that’s a big thing there, let me tell you!”

He continued, “And I’ve filled in for a dance partner when they have dance lessons.” He paused and grinned. “Me and all those women,” he said.

Brown believes the best part of his day happens when he first arrives at work in the mornings. “I’m there before they go down to breakfast,” he said. “I want to see all their faces. I say ‘Good morning,’ and ‘How are you doing?’ I’ve gotten so close to them, and I treat them like my family!”

And the residents have noticed. They filled out the paperwork for the award on Brown’s behalf, then celebrated the announcement of the award, made at The View on February 19th, with great enthusiasm.

Brown recalled the event with emotion, given his family’s focus and schedule at the time. His wife Hope, the first grade teacher at , had just been diagnosed with a form of liver cancer. The Browns were planning to leave for appointments at Mayo Clinic in , so the whole family was gathering that day for lunch with residents at The View before the trip.

“I was trying to get everybody organized,” said Brown, who was looking after the residents as usual and his own family, “and then they presented me with this award! I was speechless, of course.”

After all the applause, the residents spontaneously formed two lines. “Every resident gave me a hug on the way out,” Brown said. “They thought I was very deserving to get it.”

He paused and chuckled before adding, “They think I work too hard! But it’s uplifting, knowing that it came from them.”

Brown will actually receive the award in a ceremony at the North Dakota Long Term Care Association’s 33rd annual convention, during the banquet planned for April 28th in .

One of Brown’s biggest surprises related to the announcement was the reaction of his sons Chris, who is finishing an elementary education degree at , and Josh, a senior at . “They thought I was very deserving,” Brown said. “Coming from them, that really meant a lot!”

In the meantime, he plans to keep working for The View’s residents. “Things won’t change on a day-to-day basis,” he said. “I’m always working for them and doing what they want. I plan to stay there as long as I can, especially now knowing the residents obviously think that much of me!”