Two structures at Pioneer Village are picked up and moved 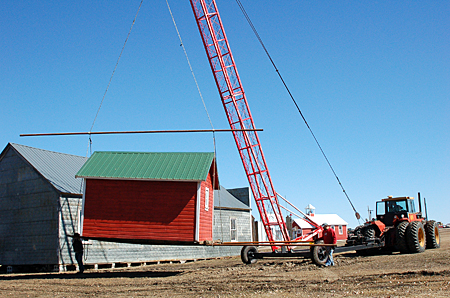 Pioneer Village balancing act . . . Some serious work gets done April 1st
when volunteers lift and move the harness shop to a new concrete
foundation. The move required Rodney Landers, in the tractor, to push
the crane and building around the perimeter of the Village
and behind the Niobe Hall, shown here, to the shop's new location.
Russ Rytter and Bryan Quigley assisted in the operation.

By Caroline Downs
Spring cleaning at Kenmare’s Pioneer Village took on new significance last week as volunteers moved actual buildings around as part of the project list.
New foundations were poured for the cook car and the harness shop, with Barry Christensen, his employee, and Russ Rytter assisting Lake County Historical Society board president Bryan Quigley with the cement work on March 30th.
Rodney Landers had already formed up the slabs for the new foundations, but he joined the men to finish the cement project.
By April 1st, no one was fooling with the plan as Quigley, Landers and Rytter were ready to relocate the two small structures. Several local businesses offered support for the move.
MW Industries and Tom Mau loaned the group the pipe used to stabilize the Harness Shop during the lift, while Burke-Divide Electric Co-op provided two large poles to help balance the cook car.
Larry Nore of Nore’s Body Shop arrived with a tow truck in order to haul a couple of farm implements on display at the Village out of the way of the crane. Harris Construction donated and delivered gravel for the base of the foundations, along with a little extra to give the moving equipment traction in the mud. Gooseneck Implement loaned a forklift and skidsteer for the project.
Using Landers’s tractor, crane and expertise, Quigley and Rytter had the cook car set on its new foundation by early afternoon.
The harness shop move required more strategy and care, as the building was removed from its location on the north side of the property and hauled around the perimeter of the Village, behind the Niobe Hall to its new home next the blacksmith shop, across the boardwalk from The Kenmare News museum.
Rytter and Quigley prevented the harness shop from swaying wildly on its chain tether to the crane as Landers guided the entire set-up with his tractor.
“We needed to get these two buildings moved so we could get ready for Happy House Movers to come and move the Bintz House and the Niobe Hall,” explained Quigley. “Fat Boys Construction has been contracted to build the new foundations under the Bintz House and the Niobe Hall.”
He added that a few trenches in the lawn were left by the moving equipment. “We will have some landscaping to do this spring,” he said.
Following Thursday’s move, Richard Pausig and Quigley tore the rotten floor boards out of the Harness Shop. That building will now have a cement floor.
“The work done this week was part of the grant from the State Historical Society of North Dakota that we received last fall in the amount of $14,325.00,” Quigley said. “We have to match this grant dollar for dollar. The Kenmare Veteran’s Club helped significantly with the matching dollars needed.”
He noted the value of help provided from the community and the surrounding area. “Rodney Landers and the volunteers saved the Pioneer Village about $3,000 with all the work that was done this past week,” he said. “Farmers are often times our best volunteers if we can catch them before they go in the field.”
The work for new foundations under the Bintz House and Niobe Hall should take place within the next few weeks, weather and conditions permitting. Visitors will be able to appreciate the changes after Memorial Day, when the Pioneer Village opens for summer tours. 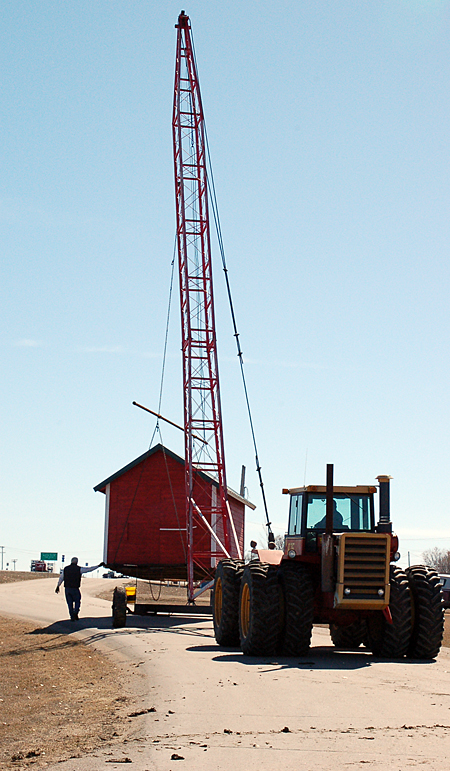 One shop, on the move . . . The relocation of the harness shop at Pioneer
Village is no joke on April Fool's Day as the building is suspended from
a crane and tractor. The move is part of a project to upgrade
the foundations of four structures at the Village this spring.
Prev Next