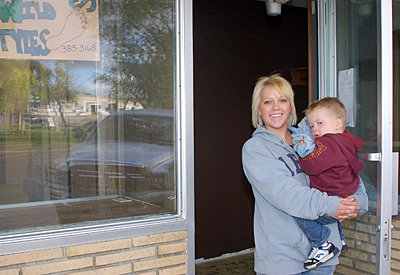 her older son Gage take a break from cleaning and painting

at her new business, which opened last week in the former

Wolverine Drilling building on the south side of Kenmare's

downtown square. The full service salon and spa has been

a dream of Holter's since childhood, and customers can

pamper themselves with the variety of services,

A massage therapist will also be joining the business, offering treatments such as regular massage, deep tissue massage, stone massage and certain types of body wraps.

“People deserve to treat themselves,” said Holter, adding that several residents from this area already schedule spa appointments in and arrange for the extra time and expenses of gas, meals and daycare. “Being a mom myself, on my days off I want to be with my kids. This way, if someone wants a pedicure and massage, they can get a babysitter for an hour, or do it on their lunch break or quickly after work. It’ll be more convenient, period.”

Wild Styles Salon & Spa is open daytime hours Monday through Saturday each week, with evening hours on Tuesdays with Thompson and Thursdays with Holter. Saturday’s hours will extend to 2 or 3 pm, depending on appointments.

Opening Wild Styles Salon & Spa has been a goal of Holter’s for quite a while. “It’s been my dream to own my own building,” she said. “I want to utilize everything I learned at [cosmetology] school.”

Holter graduated from Headquarters Academy of Hair Design in August 2005, after spending one year enrolled at . “I always knew I was going to be a teacher or a hairstylist,” she said, “but after one year in the education classes, I knew that wasn’t for me. I’ll never wonder, ‘What if?’ I love what I do now!”

She worked for nearly a year at the Regis Salon in , then returned to Kenmare in May 2006 to join Connie Livingston at the Beauty Nook.

When an opportunity came along for her to purchase the former Wolverine Drilling building on the south side of Kenmare’s downtown square, Holter knew she was ready for the change. “Once I looked in here,” she said as she showed off the remodeling work completed for her salon, “I told [my husband] Ryan that I fell in love again today!”

The former offices provide the perfect setting for the various rooms Holter envisioned for her business. She chose vivid paint colors to reflect the atmosphere she wants to create in each setting, with rooms for styling hair, facial and body waxing, pedicures and manicures, tanning and massage. Separate men’s and women’s bathrooms, as well as a shower area available to tanning or massage customers, complete the layout.

Holter has done much of the painting and redecorating herself, with the aid of friends and family also enthusiastic about the new business. Ron Evans installed the new flooring and Butch Norrie handled the plumbing changes needed.

Holter purchased the downtown building with an interest buy-down supported by the Fund-Itt Committee and the Kenmare City Council, and she has applied for tax exemptions available through the Renaissance Zone program. “Everybody is so supportive,” she said. “[Mayor] Roger Ness said the Fund-Itt Committee was formed for this purpose. This is one of the first new businesses to open downtown for a while.”

She also worked with other local businesses as much as she could for equipment and supplies she needed, including a sign that is being manufactured by Duane Ingerson. “It’s so nice to live in a small town,” Holter said, describing one Sunday afternoon when she ran out of the paint color she was using and an employee from Hansen’s Hardware mixed another can for her on a moment’s notice. “In every aspect, everybody’s been so much help!”

The buzz about the new business has reached Holter’s ears, and she’s looking forward to welcoming local customers as well as clients from Bowbells, Lignite, , Donnybrook, Carpio and . “A lot of people around town say they’re very excited and they can’t wait,” she said.

She has two manicure tables and two pedicure chairs with massage and whirlpool spas for the feet. As she gets organized, she wants to offer different combinations of services as packages for holidays and birthdays.

Thompson will maintain a full-time schedule at Wild Styles, moving from her job at the Solitude Salon & Spa in where she has worked since graduating from the in August 2006.

Holter has taken careful consideration with prices at the new salon and spa. “I averaged my prices between what we did at the Beauty Nook and [what is charged in] ,” she said, adding that she also talked with current customers and an aunt living in another small community. Then she grinned. “I took the community population into account, and I listened to my grandma, Ruth Mogren!”

To find out more about the services and products available at Wild Styles Salon & Spa, call 385-3168 during business hours.

Holter plans a grand opening for Kenmare’s Light Up Night on November 27th, but in the meantime she invites former and potential clients to schedule themselves at the salon and spa. “This is something to do to pamper yourself,” she said. “It’s worth it!”