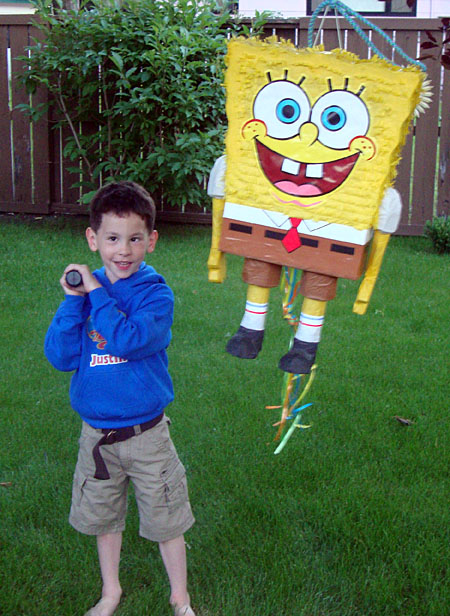 On the mend . . . Justin Burud, six-year-old son of Jim and Melissa
Burud of Kenmare, is recovering from a bout of West Nile virus.
Justin's case was the second confirmed incidence of the disease
in North Dakota this summer. Health officials remind residents
to use insect repellent and take steps to reduce
standing water around their homes where mosquito eggs
can hatch and larvae develop.

Melissa Burud of Kenmare never dreamed a press release issued by the North Dakota Department of Health for a confirmed human case of West Nile virus would relate to her family, much less one of her children. After all, Melissa serves as the public health nurse under the First District Health Unit, and she and her husband Jim pay attention to all the health bulletins sent from the state office.

During virus season, that means insect repellent is a staple for their household. “You always think, ‘That’s not going to happen to us,’” said Melissa. “Even when I was spraying the kids, it was mostly to prevent mosquito bites.”

The West Nile virus statement released to the media on July 28th that described a young boy in literally hit home as the Buruds’ six-year-old son Justin tested positive for the disease.

Fatigue and aches not

Melissa believed the infection started during the July 4th weekend, during a family reunion held at the Mouse River Farmers Union Camp. “It had been raining and it seemed very humid,” she said. “We were wearing long sleeves and long pants, and spraying.”

The high number of mosquitoes in the area was noted by several adults at the reunion, with parents frequently re-spraying their children. One evening, though, Melissa recalled Justin wearing sandals without socks and complaining later of several mosquito bites around his ankles and slightly higher on his legs.

By Tuesday, July 6th, he was showing symptoms of the illness. “He started out by being tired,” said Melissa. “He was out by 7 pm that night, so we took him to bed. Later on, he woke up with a fever.”

Melissa gave Justin Tylenol, but when his fever didn’t respond within a couple more hours she tried Ibuprofen. That medication also failed to have any impact. “A couple hours later, here he is saying, ‘Mommy, I need medicine. My head hurts,’” she said. “He shouldn’t have had that much headache pain.”

Justin also complained of aches in his legs and feet. By the next morning, he refused to be covered with a sheet or cold washcloths, although he kept his pillow over his head. “He just whimpered when the light in the bathroom would come on,” said Melissa. “And here I am, knowing I’ve done what I think I can do.”

The symptoms made her suspect . While she tended to Justin, Jim checked further information at the kidshealth.org and ndhealth.gov websites. “The information described Justin to a T,” said Melissa. “At that point, we couldn’t get him to eat anything. All he would ask for was a cold drink of water. I would ask him if he would like a popsicle or something to eat, and his answer was always ‘No.’”

Melissa said Justin stayed in bed from Tuesday night until Thursday afternoon, when his fever broke. He joked about going to bed early Friday and Saturday, and then did so, sleeping from about 6:30 pm until 7 am both nights. The constant fatigue continued into the next week, along with some aches. “He was saying, ‘I’m tired, just so tired,’ so I called down to the state [department of health office],” said Melissa.

On July 15th, she had Justin’s blood drawn at the lab and sent to the state department of health for virus testing. “As a parent, you want to know,” Melissa said, “because if it wasn’t virus, then it was something else.”

The NDDOH offers free testing for virus during the summer season, and the Buruds heard the results from Dr. Sabiiti at the Kenmare clinic on July 23rd. “I was pleased with how fast the state turned around the information,” said Melissa.

By last week, Justin was dealing primarily with fatigue. “He doesn’t complain of headaches or even his legs hurting anymore,” Melissa said, noting that the fatigue could linger for several more weeks or even a couple months.

Justin was not hospitalized at any point during his illness, but Melissa acknowledged the thought crossed her mind, even as a trained nurse who could take time off work to stay home with her son.

“Since I had an idea what it could have been, that kept me from hitting the panic button,” she said. “But the fact that I was not getting rid of the fever and he was whimpering in pain, I was almost at the point where I thought maybe we should take him in.”

Because Justin continued to ask for and drink water, he stayed hydrated, which worked in his favor. “More severe complications come up with the loss of appetite when [the patient] doesn’t take water,” said Melissa. “Dehydration is what you need to get under control then.”

She had heard of situations where effects of the disease lasted up to two years. “You get so worn out fighting this that you’re going to be more prone to little things until your body can rebuild itself,” she said.

Justin is expected to recover fully, the same way most children do. “Ninety-nine percent of kids go back to baseline, like they’ve never had it,” Melissa said. “The one symptom that hangs around the longest is the fatigue. If this is what a mild case is like, though, I’m not sure I could handle a severe case.”

Now that Justin is active again, the use of insect repellent has a new significance in the Burud house. “The main purpose for using it is to keep the kids from getting virus,” Melissa said. “You look at things a whole lot differently.”

She believed she had him covered thoroughly during the reunion weekend, but now she makes certain his hands, neck and ears are also sprayed. “And it doesn’t hurt to re-apply the spray,” she said, adding that sweat or water can diminish the effects of the repellent.

She suggested people follow the protective measures listed by the state health department, including:

*Use insect repellent that contains DEET, picaridin, IR 3535, oil of lemon eucalyptus or permethrin when outdoors, following directions on the manufacturer’s label.

*Limit outdoor activities between dusk and dawn when mosquitoes are most likely to bite.

*Wear long pants and long-sleeved shirts while outside, when possible.

*Eliminate stagnant water and leaf debris in containers around homes where mosquitoes can lay their eggs, including buckets, flowerpots, old tires, wading pools and birdbaths.

*Repair screens in windows and doors to keep mosquitoes from entering your home.

*Keep the grass around your home trimmed.

So far during the 2010 West Nile virus season, beginning June 1st, 102 humans have been tested for the disease in , with two cases confirmed as positive. The other infected individual is a female in her 30s living in .

West Nile virus was first identified in in 2002. Since then, a total of 1,284 human cases of the virus have been reported in the state. According to West Nile Surveillance Coordinator Michelle Feist, everyone is at risk of developing the illness after being bitten by an infected mosquito.

People ages 50 and older are at the greatest risk of developing serious complications from the disease. On the other hand, individuals of any age who are infected may experience no or very mild symptoms.

After the situation with Justin, Melissa recommended that parents monitor their children’s health this summer and take steps to have a child tested if they suspect a case of virus.

“If some doctor isn’t going to do the test, find one who will, especially if it’s your child,” she said. “You are your child’s voice and you need to advocate for them.”

Further information about virus can be found online at www.ndhealth.gov/WNV/FAQS/WNVfacts.