Bremer Bank to pull out of Berthold

After 45 years in Berthold, Bremer Bank will close the doors to its branch location there at the end of the business day on October 29, 2010. 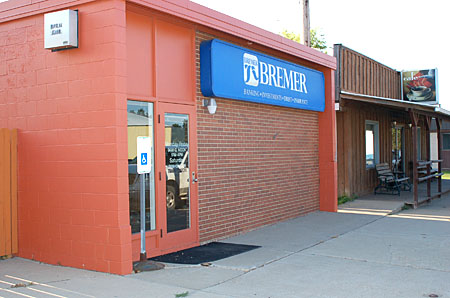 Closing . . . The Bremer Bank branch office on Main Street
in Berthold will close on October 29th.

After 45 years in Berthold, Bremer Bank will close the doors to its branch location there at the end of the business day on October 29, 2010.

The announcement was made July 26th, in a press release issued by Bremer Bank president Brent Mattson. The Berthold branch will continue normal operations, which include opening accounts, the sale of savings bonds, CDs and travelers checks, and processing deposits for savings and checking accounts, until the October closing date.

“This was a very difficult decision,” Mattson said, “but it stems from safety and security concerns for our employees and customers. A bank of that size and the limited number of staff is susceptible.”

Regarding susceptibility, Mattson was referring to a May 2009 incident when a Bremer Bank branch location in , was robbed at gunpoint. After threatening the single employee present at the time of the robbery, thieves left with more than $50,000. One suspect was apprehended in June and the second caught in September, while a third person was named for providing the weapon used in the incident. The trial is slated to begin August 24, 2010.

Bremer Bank also announced the October 29th closure of its branch locations in Hoople and , small rural communities in northeastern .

Mattson noted that Bremer Bank was working with its customers in all three towns to identify other ways to meet their banking needs, including online banking, 24-hour telephone banking, ATMs, Remote Deposit, and Bank-by-Mail. Berthold customers will also have the option to travel to to bank at one of the three Bremer Bank locations.

Currently, the Berthold branch of Bremer Bank serves customers from 9 am to 12 noon and 1 to 4 pm Monday through Friday, with Saturday hours from 9 am until 12 noon.

Berthold mayor Alan Lee said he had been contacted by Mattson regarding the closure and the loss of banking services to the community. “It’s going to have an impact,” said Lee, describing the Bremer Foundation as a frequent partner in school and community projects. “Bremer has been a big part of the community. They’ve supported us in a lot of endeavors, and they’re going to be missed.”

The closure will create difficulties for merchants in Berthold. “I’ve talked with some of the business owners, and they’re pretty concerned,” Lee said, adding that most of the local businesses use Bremer Bank for their daily deposits and to get change for their tills. “Every business in town keeps funds there because [Bremer] has a presence in town. People cash their paychecks there because it’s convenient for them.”

He disagreed with Bremer Bank’s position that the small branch posed safety and security risks to staff and customers. “Now, without anywhere to take an overnight deposit, this puts more community people at risk than it did before,” he said. “Nobody wants to keep large amounts of cash on hand, so now business owners are trying to make provisions to get their money to .”

“It’s a real blow to the town,” said Bob Inman, president of the Berthold Economic Development Corporation. “The way I understand it, it was a decision made by corporate headquarters, but maybe corporate’s not looking at the big picture of everything coming this way.”

Like Lee, Inman was notified by Mattson about the closure. However, when Inman asked local customer Richard Debertin how he felt about the news, Debertin had no idea about the coming changes. “It’s been a shock to a lot of [the customers],” said Inman.

He continued, “I don’t buy their safety issue. We’ve never had any problem with the bank. Dee [Carico] from the C-Store goes to that bank twice a day, and the bar and restaurant are over there at least once a day. United Agronomy, the Sportsmen’s Club, the city of the Berthold, the Development Corporation, we all bank there. To go 24 miles [to Bremer Bank in ] is going to be darn inconvenient.”

Mark Birdsall, owner of Birdsall Grain & Seed, wanted Bremer Bank to maintain its presence and influence in the community. “I’m disappointed with the decision because a majority of the businesses utilize the bank,” he said. “Bremer has been a great supporter of everything in our community and we don’t like to see them go, especially at a time we think has a lot of expansion potential because of the oil business.”

Mattson said Bremer Bank was seeking a suitable buyer for their building on Berthold’s . “It’s a walk-up bank with decent square footage,” he said. “If we are unable to find a viable business for this location, we will initiate discussions within the community and with area non-profits to see if there is an opportunity for Bremer to forge a community partnership that would be beneficial to Berthold.”

Lee would like to see another financial institution set up shop in Berthold. “We’re hoping some other banks will take an interest and look at us,” he said. “We don’t know what the future is, but hopefully someone is going to pick us up.”

Inman agreed. “We’re trying to get another bank, and we’ve got some feelers out there,” he said. “I know there are enough deposits.”

Bremer Financial Corporation is a privately-held, $7.8 billion regional financial services company jointly owned by its employees and the Otto Bremer Foundation. The company is headquartered in , , and provides a range of services to 100 locations in , and , with two additional locations to be named this fall.

Bremer currently operates in 24 locations in , including the Berthold site. “I’ve got a lot of friends in that community,” said Mattson. “It was a tough decision.”

“They have a strong presence here,” Lee said. “I’d really like to see them stay.”