The work week in Kenmare started with an accident downtown shortly after 9 am Monday when the Ankenbauer Dray garbage truck created its own mess. 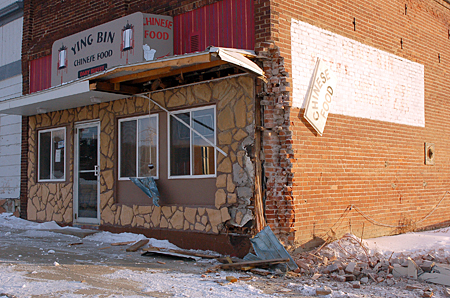 Monday morning rubble . . . The southwest corner of the
Ying Bin Restaurant in downtown Kenmare shows the effects
of the impact with the Ankenbauer Dray garbage
truck Monday morning.

The work week in Kenmare started with an accident downtown shortly after 9 am Monday when the Ankenbauer Dray garbage truck created its own mess.

Driver and business owner Todd Ankenbauer was working his normal Monday route, picking up garbage at the house directly north of State Bank & Trust of Kenmare, when the truck rolled away from him. “I heard the emergency brake pop off,” he said.

As Ankenbauer watched, the truck rolled backward, southbound, downhill on , where it first hit the back of a 2009 Honda car owned by Sandy Westlake and parked next to the bank.

At that point, the truck changed directions slightly and angled across the street toward the apartment building owned by Jack Grover and the Ying Bin restaurant owned by Stephen and Susan Yang. The truck clipped the awning and southwest corner of the restaurant and crashed through the fence erected last year across the empty lot between Ying Bin and the Town & Country Credit Union Building.

Deep drifts of snow finally stopped the truck’s progress as it rolled to a stop 15 feet or so short of the north wall of the Credit Union. The sidewalk on the northeast side of the square was littered with bricks and metal strips from Ying Bin’s building and awning, as well as rebar and sections of fencing material.

Ankenbauer attempted to re-board the truck while it was rolling, but he was unable to climb into the cab. He injured his arm in the process.

No vehicles were parked in front of the apartment building or restaurant at the time of the accident, which was unusual for that time of the morning. The Kenmare Police Department responded to the incident, and the City of arrived with a loader to pull Ankenbauer’s truck from the empty lot back to the street.

’s car sustained some damage to the back end and along the driver’s side, but a full estimate was still in the process of being determined Tuesday morning.

Ankenbauer noted some damage to the right side of the garbage truck where it hit the restaurant building, but the truck could still be driven.

Susan Yang said she and her husband normally arrive at the restaurant before 9 am, but they happened to still be home Monday morning at the time of the accident. The police arrived to tell them about the accident.

Most of the damage to the restaurant occurred on the exterior of the building. Yang was disappointed because the new sign and awning had been installed just over a year ago.

The area immediately inside the walls hit by the truck encloses the restaurant’s store room and a portion of the entry area by the windows south of the front door. Yang noted the crash impact knocked several items from the shelves in the store room.

Some damage appeared to the paneling and sheetrock of the interior walls and ceiling in the entry area, which Yang said had been remodeled within the past year.

The kitchen, food preparation and customer seating areas for the restaurant were not affected by the crash. Yang said she discussed the situation with the Kenmare Police Department and was told the restaurant could continue its regular operations.

“There is no problem with cooking and serving,” said Yang. “We’re open for our regular hours.”

She said Ankenbauer had stopped at the restaurant later on Monday to talk about making repairs to the building through local contractor Rob Wittman. Yang expected work to begin soon, depending on the weather. 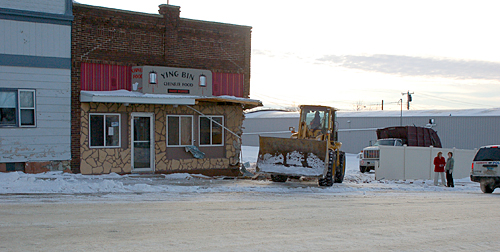 Getting back to work . . . City employee Mike Thompson uses
a loader to pull the garbage truck from the snowdrift that stopped
its driverless progress down the hill along Central Avenue Monday
morning. The truck hit one car, the corner of Ying Bin restaurant
and the fence in front of the vacant lot before it came to a stop.
Garbage collection service continued as usual.