Photos as therapy develop into book as snapshot of rural culture

Harlan Nelson started photography as a way to heal the physical pain that has plagued him since childhood. After a couple decades of “making pictures,” to quote his phrase, his hobby evolved into a book project and a vanishing community’s collection of stories and photos. 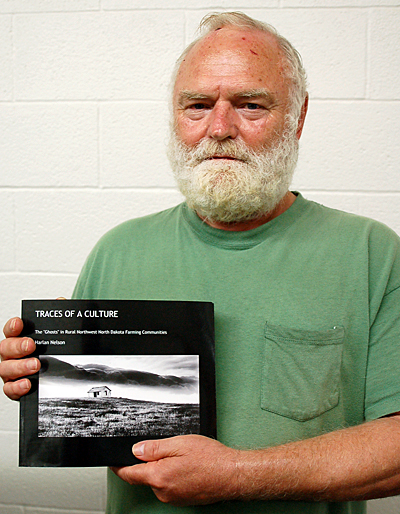 a Culture last week, which features over 200 of his black and white photos

taken in northwestern North Dakota, along with anecdotes, historical

remembrances and pictures contributed by residents of the region.

Harlan Nelson started photography as a way to heal the physical pain that has plagued him since childhood.

After a couple decades of “making pictures,” to quote his phrase, his hobby evolved into a book project and a vanishing community’s collection of stories and photos.

Now, Traces of a Culture: the “Ghosts” in Rural Farming Communities is ready for the public, with copies available from www.blurb.com.

A native of , a graduate of and a resident of , , Nelson took his first photography class in the 1970s at . After working with other cameras, he became interested in large format photography, taking classes at and using an Arca-Swiss 8x10 view camera that created black and white pictures similar to those made famous by renowned photographer Ansel Adams.

For Nelson, the art of photography became a type of therapy to combat a lifelong physical pain and stiffness that couldn’t be managed by standard medical practices. In the introduction to Traces of a Culture, Nelson wrote, “Photography has been ideal for me in several ways. I could to it alone, relax, and not be concerned about people seeing my hideous-looking, tight, grumpy face. But most of all, there is this incredible moment when I look through the ground glass of a view camera and become almost breathless. During those moments, the image somehow gets me in touch with some inner part of me. I normally did not expose any film unless I got that breathless feeling.”

Over the years, that breathless feeling translated into hundreds of photos by Nelson, primarily of the abandoned houses, barns, churches, country schools and quiet rural towns that dotted the northern plains, set against the backdrop of a dramatic sky. The photo on the cover of Traces of a Culture is one such picture of a tiny cabin moved in the 1950s from its location along the to a site six miles east of Lostwood, just before the river was dammed and flooded. The clouds of a brewing storm can be seen dwarfing the house in Nelson’s photo. “That storm also released a tornado near Sherwood,” he recalled.

Nelson retired from a career in software engineering in 1998 and started making extended summertime visits to his brother Chet Nelson’s cabin in . He pursued his hobby with more intensity and developed a collection that earned recognition among members of his photography society in . During the past decade, Nelson regularly shared his photos with students at the request of one of his former professors, and even held a solo exhibition of his work at photography shop’s gallery in the city.

“I’m not a fan of exhibitions, though,” he said. “You have twenty big, framed photographs, so what do you do with them? They don’t sell very well. I quit dreaming about trying to get them out into the world. That wasn’t the purpose anyway.”

However, Nelson discovered the opportunity to create a book of his work, as offered by Blurb, an online company that makes software and book sales available to customers who want to format, publish and sell their own books. “I told Chet about it, and he made two books before I finished mine,” Nelson said, laughing at the irony of the situation.

Traces of a Culture began taking shape early in 2008, as Nelson listened to friends in and who feared his photos would be lost someday after his death. He started sifting through pictures he’d taken across the northern plains in the and , finally narrowing his choices to the northwest corner of , the landscape he knows best.

His original idea was to set up a 200-page book with pictures of old houses and other buildings in the area. “Then, naturally, I wanted to add a little bit of information about each photo,” he said.

That quest led him to Gloria Anderson Lagorin, wife of Nelson’s cousin Morris Lagorin and a former teacher at one of the schools, a photo of which happened to be among Nelson’s final choices. “She wrote this nice little story about her experiences there,” Nelson said, “and that got me started on adding more information.”

Soon, Nelson was tracking down former owners or residents of the places he photographed. He flipped his copy of the book open to a picture of a small, desolate cabin on the prairie, surrounded completely by overgrown grasses with no evidence of a tree or shrub. “I met the woman who lived there as a young bride,” he said, adding that the elderly woman admitted her gratitude at leaving that farmstead and moving to a nearby town with her husband.

Nelson spent most of the past year collecting the stories and anecdotes to accompany his photos. “I enjoyed this all so much, first taking the pictures,” he said, “and second, talking to the people. That was so much fun, meeting people who I didn’t know.”

One of those encounters occurred after Adrian Hanson guided Nelson around much of northern . “We’d been to Kenaston, Blaisdell and , and he said, ‘You should go talk to my mother,’” Nelson said. “It ended up that I went to her place several times.”

During one of Nelson’s first visits with Phyllis French Hanson, the two started talking about the and Hanson brought out a picture of herself as a first grade student, perched on horseback for her daily two and a half mile ride to that very school. Nelson couldn’t ignore such a treasure, and asked for permission to include it in his book. Soon, he was collecting additional photos as he interviewed other area residents.

Hanson shared some of her original poetry with Nelson, which found its way into his book. Then, a painting of Crowfoot School No. 3 done by Hanson’s daughter, the late Vernell Hanson, caught Nelson’s attention, and he included two of her paintings. “That put some color in the book,” he said.

With the addition of the paintings, Nelson felt free to use some of his own color photography, including portraits of Native American dancers he took while attending a festival near New Town one year, and even a few wildlife pictures. “I just started adding more and more,” he said. “Once I realized I could do whatever I wanted, that was fun!”

He estimated nearly a hundred people contributed to Traces of a Culture through interviews or sharing their own pictures, with about ten people writing memories and short essays specifically for the book. “It started out as my book of my photos, but it’s totally turned around,” Nelson said. “Now, it’s a community book.”

While he was reluctant to list all the contributors, for fear of missing anyone, he mentioned that his siblings Chet, Joan and Margie had offered many pictures, stories and proofreading. He also credited his cousins Morris Lagorin and Bob Martin of , for their assistance with checking facts and proofreading.

And after Nelson spent the end of July making revisions, the book was released for sale during the first week of August. The final product has grown to a 440-page hardcover edition that currently sells exclusively from www.blurb.com for $119.95.

Traces of a Culture is arranged by structures, with chapters for schools, barns, churches and farmsteads, including one chapter devoted to photos taken in . Other chapters focus on farm auctions, town life, and the interior and exterior views of buildings.

A simplified map provides a general location for the cities and small towns mentioned, with coordinates that Nelson listed next to most of the photos. A dedication page features Twila and Lawrence Drabus of Kenmare, with a remembrance from Nelson about the influence these two people had on his life.

The drive to finish his project has consumed most of Nelson’s time this summer. “I’ve been so busy trying to wrap up the book that I haven’t taken a single photo [with the view camera],” he said. He has made a little time for some wildlife photography with his Nikon-D80 camera.

With one book now complete, Nelson has plans to work on a second that will detail the self-healing process he has undertaken in the past decade. “I want to write about what I’ve learned,” he said. “Ten years ago, I was thinking I was going to die. It’s been a journey from immobilization to now, I don’t know what I want to do when I grow up!”

Nelson maintains a small display of his photography at Ying Bin Chinese Restaurant in Kenmare. Interested readers can find Traces of a Culture by searching either its title or author on the Blurb website. Nelson hopes the book finds an audience among other fine artists and readers interested in the history of northwestern , but he acknowledges that sales are beyond his control at this point, and not necessarily a measure of the book’s success.

“The truth is, the pictures were taken to heal myself,” he said. “Instead of just letting them disappear, I started making a book. In the process of making a book, it came to involve not only those photographs but also other people’s experiences with the stuff I was photographing, and included other people’s input. That’s really what the book is.”