A new addition festooned with blooming flowers and a large Dakota Blessings sign at the home of Jane and Lance Kalmbach has attracted more than a little attention since June. Now, the public is invited to an open house at Dakota Blessings Art Studio, 503 1st Avenue NE in Kenmare, on Thursday, August 27th from 5 to 8 pm. 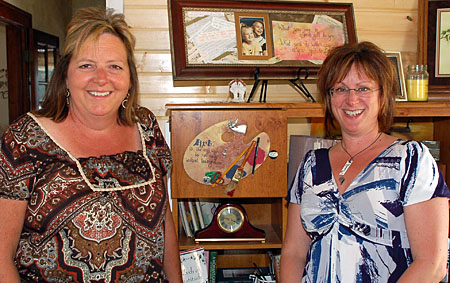 Artists Tami Gravesen and Jane Kalmbach welcome the public
to see their work at an open house scheduled at the Dakota Blessings
art studio in Kenmare on Thursday, August 27th. 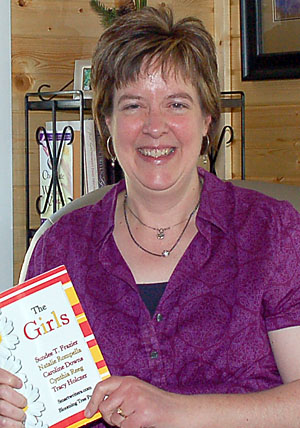 Caroline Downs
Writer invited
to Dakota Blessings
Caroline Downs will be joining Kalmbach and Gravesen at the Dakota Blessings open house as a guest author. Downs, writer and feature editor at The Kenmare News since November 2000, recently had a short story released in The Girls, an anthology of stories collected for middle grade readers and published by Blooming Tree Press, Austin, TX.
Downs revisited her childhood love for writing after becoming a science, language arts and reading teacher in Worland, Wyoming, in 1990. By 1993 she was involved with the Wyoming Writing Project, where she facilitated numerous workshops and classes for other teachers of writing around the state. In 2001, she earned an MFA from Vermont College, Montpelier, VT, in writing for children and young adults, after studying with children’s authors Sharon Darrow, Marion Dane Bauer, Carolyn Coman and Louise Hawes.
She enjoyed writing with and for her students, and the move with her husband Doug to North Dakota in 2000 allowed her to extend her writing to readers of Kenmare’s weekly newspaper. With Kalmbach, she is cofounder of the Kenmare Summer Arts Institute, leading writing and readers theatre workshops for young artists in the area.
In addition to almost nine years of publication in The Kenmare News, Downs has an essay published in the anthology Gifts from Our Grandmothers, edited by Carol Dovi, and articles about the local refuges and wetland management districts published in a commemorative issue of North Dakota Outdoors in 2003. Her current work is focused on a middle grade novel manuscript.
Prev Next