New operator of Carpio cafe grew up in the business

“I’m a traditional kind of cook,” said Candie Rohrer, who just leased the Valley Inn Cafe in Carpio and reopened it as Candie’s Cafe. “That means a lot of good old-fashioned food with some German behind it.” 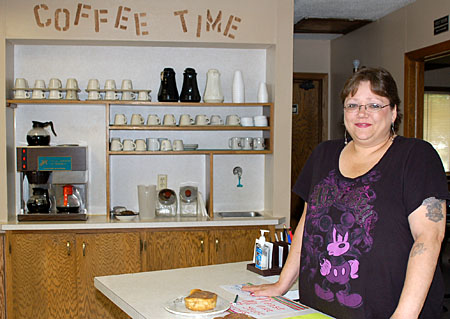 Homemade at Candie's Cafe in Carpio . . . Candie Rohrer offers
homemade fare on her menu at the newly-opened Candie's Cafe,
with recipes learned as a girl while working
in her grandmother's cafe in New Salem.

“I’m a traditional kind of cook,” said Candie Rohrer, who just leased the Valley Inn Cafe in Carpio and reopened it as Candie’s Cafe. “That means a lot of good old-fashioned food with some German behind it.”

Candie literally grew up in her grandmother’s cafe in New Salem, North Dakota, working there from the time she could see over the top of the counter, but she never expected to operate her own business. “I’ve always been a cook, a waitress or a bartender,” she said. “Then, the opportunity came along to lease this cafe. I didn’t even know where Carpio was until I came up here to meet with the board!”

That opportunity knocked in an unlikely setting-- in . Candie’s father was a patient there in late May, just down the hall from Carpio resident Lloyd Peterson. The two men struck up an acquaintance, and as Candie’s father talked about his family’s days in the cafe business in New Salem, Lloyd talked about the recent closing of the only cafe in his community.

Candie laughed as she described the results. “One sick person to another led me to a cafe!” she said. “It was like fate.”

She was living in Max then, where she tended bar, a job she started when she became a single parent 15 years ago. Now, her sons Michael, 20, and Dustin, 18, live on their own and Chris, 15, will join her in Carpio this fall.

“I’m going back to my roots,” Candie said. “You can make money in a bar, but I’d rather see people with a full stomach who say, ‘Oh, that hit the spot,’ when they finish a meal. I love the quiet community, and I’m a small town kind of girl.”

Her mother in liked the sound of the new opportunity for her daughter, so she assisted with financing. Candie met with the cafe’s board of directors in June, and the two parties agreed on a lease.

Cafe has been community
project for 31 years

For Jamie Armstrong, president of the cafe’s board of directors, keeping the business open was critical for the community. “People bought stock in that 31 years ago, in order to get it started,” he said as he described the efforts of the Carpio Development Corporation to bring a restaurant to the community. “We have a five-member board to maintain the building and look out for the best interests of the business, but our intention is for someone to come in and lease it.”

The board has hired managers for the cafe over the years, with the most recent manager choosing to take a different job last spring. When no one else expressed an interest in the position, the board made the difficult decision to lock the doors in April.

“Closing the cafe was the furthest thing from our minds [as a board],” Jamie said, “but considering the circumstances, we had to do it.”

According to Jamie, the board was impressed by Candie’s enthusiasm during the interview. “She was gungho to get started,” he said, “and it was a matter of getting the pieces into place.”

He was pleased to see the continued operation of the community’s investment. “When you think of it, 31 years of that cafe being open is quite a feat,” he said. “It’s nice to see the business open up again. That brings traffic back to town.”

Candie arrived in Carpio on July 14th and is living in a borrowed fifth wheel camper until she can find something more permanent in the town’s limited housing market. She described the arrangement as “creative,” but said she wanted to get the doors of the cafe opened up to customers again. “If anyone has anything for rent and they won’t charge me oil rate prices,” she said with a smile, “I will be so happy, I will feed that person everyday for free! I’d like to settle here and stay here.”

Despite the difficulty with housing, she opened for business on the 16th. So far, the response has encouraged her. “For breakfast, we have our usual coffee crew,” she said. “Our lunches just keep getting bigger and bigger and bigger.”

Word of the cafe’s reopening has spread quickly, helped by the fact Candie offers a lunch special Monday through Saturday in addition to the breakfast items, sandwiches and burgers on her menu. “And I always have a homemade soup of the day,” she said.

Soup isn’t the only homemade treat, though. “We patty our own burgers, and we serve 1/3-pound burgers,” she explained. “Our breads and buns are Baker Boy [dough], but we raise and bake them ourselves.”

Then, there are the desserts. “They’re strictly homemade,” she said, adding that she bakes two or three pies every other day, along with fresh caramel rolls.

“I have a deep dish kuchen that seems popular, too,” she said, describing how she uses a special crust recipe and a variety of fruit fillings. “And I’m always looking for rhubarb, if anyone out there has some.”

Candie admitted she has to learn more about baking cookies, but she is a master of several other items. “I enjoy making pies and cakes, dumplings and knephla,” she said. “Basically, if you smell it and gain five pounds, I’m into that!”

She just added a part-time employee to help a couple hours each day during the lunch rush, and she hopes in time to hire another cook and waitress.

She appreciates the warm reception, especially as she’s learning her way around an unfamiliar kitchen. “The customers have been patient,” she said. “The noon specials have been popular, and I’ve received compliments on my soups.”

Candie would like to expand her menu as time goes on, especially with suggestions from customers about their favorite foods. She will also be expanding her services as she welcomes the Meals on Wheels crowd beginning in early August. She is still finalizing details for the arrangement, but she plans to serve the noon meal to that group at the cafe, with volunteers from the Carpio Senior Citizens Center assisting with delivery of meals to shut-ins.

“My father and grandmother both are recipients of Meals on Wheels,” she said. “I feel this is a very, very important program, so this is my chance to give back.”

Although she does not currently offer evening hours, she will handle special requests. “If someone wants to have a private meeting or cater a family reunion, something of that sort, give me a phone call,” she said.

And Candie is well aware of the extended hours that come with harvest time. “We do accommodate all harvesting needs,” she said. “I’m more than willing to open up in the evening for harvest crews. I would just ask that they call a day ahead of time or early that morning so I’m here to open for them and have everything ready.”

She expressed her gratitude to the customers who filled the cafe’s tables during the first two weeks. “I would to tell everyone coming in, thank you for being so patient and friendly and supportive,” she said. “That means a lot.”

She hopes to meet more local residents in the coming days, as well as folks from the surrounding area. “We plan on being here, and we have good food and conversation,” she said. “We look forward to seeing you!”