KFD sets up in new hall

Volunteer members of the Kenmare Fire Department closed up shop in their old quarters at the Memorial Hall on the morning of February 13th and moved everything to the new fire hall before lunch. 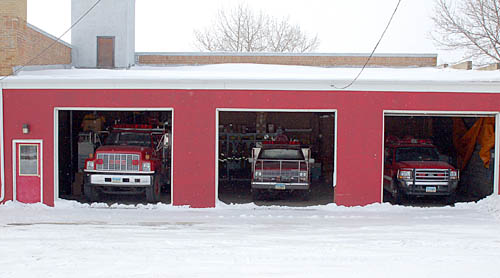 Then . . . Three of the trucks used by the Kenmare Fire Department see their last days parked at the old fire hall on the east side of the Memorial Hall.

Now . . . All four of the department's vehicles fit easily into the five bays of the new fire hall, with space available for a tanker truck to be purchased in the future.

Volunteer members of the Kenmare Fire Department closed up shop in their old quarters at the Memorial Hall on the morning of February 13th and moved everything to the new fire hall before lunch.

They even took time to wash the department’s trucks and then hose the mud and gravel off the new concrete floor before parking the vehicles in the spacious truck bay area.

Firefighters joked with one another as they hauled boxes, arranged turn-out gear, and unloaded tools and hose from enclosed trailers loaned for the event by Adam Schumacher and Larry Nore. The group met at the Memorial Hall about 9 am on the snowy, blustery day to start packing. An hour and a half later, their gear and files were completely relocated to the new hall, with assistance from Ashley Barnhart, Arionna Radomski, Joy Jacobson and Jonathan Essler of the Kenmare FFA Washington Leadership Conference group.

“The firemen helped us,” said Barnhart, with a grin. “It didn’t take very long.”

Everyone agreed the move progressed smoothly and more quickly than anticipated. “Down at the old place, it was pandemonium,” said Chuck Leet, secretary/treasurer for the department. “Everyone was running around and packing.”

Janet Leet, secretary/treasurer of the Kenmare Fire Department Auxiliary, shook her head at the whirlwind of activity as she helped other auxiliary members organize the new kitchen facility. “I remember packing up there,” she said about her work at the Memorial Hall a couple of hours earlier, “but I don’t remember where it is now!”

Everyone stayed patient as firefighters and auxiliary members sorted among the boxes, happy to have plenty of space and storage places for all the items. Their work was fueled by donations of rolls and muffins from Danny and Sara Schlosser, and beverages and pizza from SunPrairie Grain, as well as home-baked brownies.

The contributions of food for moving day capped an extensive volunteer effort that completed construction of the new fire hall and prepared the building for its new occupants. Hight Construction of Minot had the contract to construct the building and finish the bay area, but Kenmare Veteran’s Club provided a donation to the fire department for the materials needed to finish the office, kitchen and training room areas, if volunteer labor could be found.

According to Chuck Leet, volunteers stepped forward from all corners of the community and beyond. He listed several individuals and businesses who worked to complete the fire hall, including Shane Harris and Eric Anderson of Modern Woodworks for trim staining and kitchen cabinet construction and installation, Mike and Carol Thompson for sheetrock work and wall texturing, Steve Jensen and Shawn Froseth for ceiling work and other construction, Burke-Divide Electric and Pete Stroklund for electrical work, Allan Engh of Engh Hardware in Sherwood for assistance with appliance purchases, Farmers Union Lumber and Ron Evans for flooring work, Farmers Union Oil-Mohall and Butch Norrie for plumbing work, and Ron Jensen and Leet for a variety of small projects.

“This has changed the morale of the firefighters,” Janet Leet said. “There’s a lot of pride in this place, because of all the volunteers who have done all the different work.”

Current chief Dale Hanson agreed with her. “There are a lot of firemen who are enthused about being in here,” he said. “It’s been a while in coming!”

Constructed for the future

Chuck Leet explained the new hall was designed through a series of several discussions among the firefighters, with the future of the department in mind. “Things have come together and we’ve all learned a lot through this process,” he said. “Members are seeing this is here for years to come.”

The new fire hall features a 60’ x 88’ bay area, complete with a dust-free, insulated and vented compressor room for the department’s Triple Cascade compression system. Four of the five parking areas at the front of the bay include a high-pressure, 2 1/2” hose for washing vehicles and filling tanks, with the hall’s water line connected directly to the city’s water main.

With four gleaming red trucks parked in the hall, one bay remains open at this time. Leet said he hopes to see the space filled in the future by a tanker purchased by the Kenmare Rural Fire Protection District. “That’s so we have a water supply on the rural fires,” he said. “We need between 2,000 and 4,000 gallons to be effective.”

The west side of the bay area is lined with mobile, metal locker units providing easy access to each firefighter’s turn-out gear, with plenty of room for the 39 members of the department to dress for a response.

Firefighters will use rooms built at the south end of the new hall for their meetings and training sessions. A 12’ x 12’ office allows storage for the department’s records and files, and serves as the incident command station for community emergency responses. A separate 20’ x 45’ room is arranged with folding tables and chairs for meetings and gatherings.

The compact 15 1/2’ x 12’ kitchen includes two refrigerators, a dishwasher, a double-sided oven, a bank of electrical outlets, and three sinks as required by code, all organized to feed the firefighters or provide a community meal in a crisis situation.

A 15’ x 17’ storage room, a small mechanical room, and two unisex bathrooms complete the layout. The entire building was built with codes in mind, with all doorways and both bathrooms being handicapped accessible.

“This [building] is something for everybody to enjoy,” Janet Leet said, “but if there is a disaster, the facilities are here for everything.”

Hanson noted that members of the department would be working closely with staff at to educate the students about safety in and around the fire hall, especially during emergency responses. “We’ll give the school a pager, so they’ll know the same time we do when we get a fire,” he said. “We want to make sure the kids are aware of [what happens here], and we’ll be reminding the department members to take it slow and easy as they leave the building.”

The hall’s proximity to the elementary school concerned some local residents, but Hanson said the fire department and school have been in communication about the project since before construction started. “We’ve taken the kids into consideration, and we’re taking every opportunity we can to protect the kids,” he said.

To that end, a fence will be constructed between the school and the hall. A sidewalk was already poured on the east side of the hall, even though the building plans did not require new sidewalks. “That was something we wanted to do,” Hanson said as he and Leet described the appreciation they’d heard from several elementary students about the new walkway.

The fire department is also planning to host the students for a tour and equipment demonstration later this spring.

Kenmare mayor Roger Ness was pleased with the outcome of the project. “I think it’s great for the whole community,” he said. “It’s something we’ve been waiting for and the firemen deserve. It’s taken a lot of volunteer effort and donations to make it happen, everything from cutting down [Dutch-elm diseased] trees to coyote hunts, to begging!”

He praised the contributions made by firefighters and area residents toward finishing the hall, as well as the planning and leadership behind the project. “This is something to showcase,” he said. “I plan on having the Souris Basin Planning Council here this summer. They’ve been instrumental in this, too. It’s something the whole community can be proud of!”

He described the new hall as the center for various types of emergency responses in the community. “Now, we will develop an emergency plan for the city,” he said.

Some work remains to be done at the new fire hall, including more shelving for storage and the installation of benches that will be built by the Kenmare FFA chapter for the locker area. Another project involving the old firefighting bell will honor the memory of Maurice Ackerman, who joined the department in 1959, served as chief from 1972-1975, and died unexpectedly during a fire call on June 12, 1979.

The entire fire hall project cost about $600,000. Several sources have provided funds for the planning and building of the new hall through the years, including Kenmare Veteran’s Club, Town & Country Credit Union, Fund-ITT, Souris Basin Planning Council, State Bank & Trust of Kenmare, Behm’s Energy, Sandberg Redi-Mix and dozens of individuals. A balance of $180,000 remains on a special loan granted to the city by the State Bank & Trust of Kenmare.

Firefighters will continue to hold fundraisers and accept donations to pay for the project. Anyone interested in contributing toward the fire hall project is welcome to contact Chuck Leet at 701-385-4367 or any other member of the Kenmare Fire Department.