So what does USFWS Fire Management Officer Doug Downs do with his time through the winter when wildfires are a distant memory covered by snowdrifts? He fights fires in the Land Down Under. 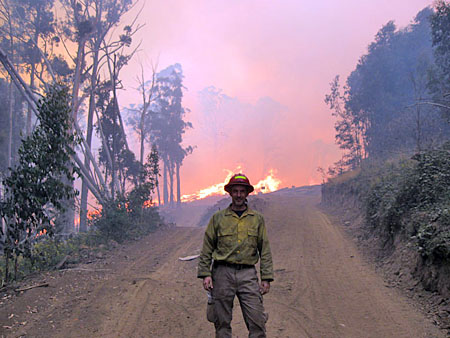 So what does USFWS Fire Management Officer Doug Downs do with his time through the winter when wildfires are a distant memory covered by snowdrifts?

He fights fires in the Land Down Under.

, who is based at Des Lacs National Wildlife Refuge in Kenmare, serves the Western North Dakota Fire District under the U.S. Fish & Wildlife Service. He was recently deployed to the state of in southern as one of three operations section chiefs among a group of 60 federal wildland firefighters sent to assist Australian fire crews for 30 days.

The American team left February 13th for , and members were dispatched across , which is one of the smaller Australian states. Several bushfires had burned about 400,000 hectares (over 1,500 square miles) at that point in remote forests and urban/forest interfaces, with 200 civilian deaths. Several communities had experienced severe losses, with the town of , population approximately 500, essentially leveled.

Downs was assigned to the Kilmore East-Murrundindi Complex North, outside of , , a community slightly larger than Kenmare located a couple of hours north of . The terrain felt familiar. “It was kind of like western ,” he said. “Not high mountains, but some of the slopes were pretty steep.”

The mountains were bordered by pasture land, where cattle grazing was common. “They also did a little bit of farming there, and there were a lot of vineyards,” said . “Their harvest was over. It was similar to late August and early September here.”

The region had been experiencing a long-term drought, with a lake near Alexandra requiring fire line around it because of trees growing 10 meters high out in the lake bed. Local residents described the lake as lacking significant precipitation or run-off for 10 to 12 years.

The slopes still managed to support a forest, and noted huge hardwood trees, mostly in the eucalyptus family, easily 100 meters tall. “Two hundred-foot trees weren’t uncommon,” he said, adding that several trees had a diameter at breast height of two to four meters. He also saw oaks and a few pines, while most conifers in the area were planted around farmsteads.

Temperatures in the region had climbed over 100-degrees F on several days in January, and ranged from the 70s to 90s during the American firefighters’ stay. Despite weeks of work by crews from across , the fires continued to threaten communities and farms. “They were worried about it getting to some places if the weather had gotten worse,” said , adding that high winds were a concern several days.

The toll of the earlier fires was evident when arrived. “They were still finding bodies while we were there, and a firefighter was killed by a falling tree on our first day there,” he said.

He often drove through the townsite of Marysville on his work around the fires. “There wasn’t much left,” he said, adding that two fires had burned together in the region, with deaths occurring on both sides.

On the fire, filled a variety of roles, including scouting firelines, operating a chainsaw and mopping up burned over or contained areas. He also supervised work on sectors of the fire, sometimes overseeing 25 to 30 crews and/or heavy equipment operations. At one point he managed operations for half of the northern part of the entire complex.

The cooperation among the Australians and Americans was productive. “At first, you feel like a fifth wheel,” said, “but then you get integrated and you get along great.”

While the Australian style of fire management is similar to that in the , the Australians base their land management agencies at the state, rather than federal, level. “I was working with people from all over , from several different agencies and states,” said Downs, “although not too many from because they were busy with floods.” Several Canadian firefighters were also on assignment in , including a group from on ’ portion of the fire.

At one point, estimated that between 1500 and 2000 people were staying in fire camp. During the first two weeks, a typical day started at 6 am for , with a briefing at 7 am and then work on the fireline until returning to the base camp by 10 or 11 pm.

“Then things calmed down,” he said. “The fire was getting close to being done. The days were starting to get a little cooler, a little shorter. They start getting rain in the fall, kind of like here.”

Because of his assignment on the fire and the Australians’ reliance on vehicles, Downs had to drive daily, sometimes between 200 and 300 miles, so he became comfortable with the right-sided steering wheel and opposite lane of traffic. He said the levers for turn signals and windshield wipers were switched in Australian vehicles. “I would turn the windshield wipers on occasionally when I was making a turn, but I even quit that by the end, too,” he said.

He appreciated the narrow wheelbase of the Australian vehicles, which allowed the trucks to handle most terrain, and he drove more than any of the other Americans, which led to some problems when he returned to . “I’m still struggling in the mornings to stay on the right side,” he said. “Now, I keep flipping the other side of the steering wheel for my turn signals!”

One major difference from fighting fires in the was the array of wildlife encountered, including wombats, a few kangaroos and several types of wallabies. He also saw several bird species, including the large lyre birds with ornate tail feathers and a tendency to imitate the sounds of other birds in the area and even chainsaws at work in the forest.

Another major difference with an Australian fire assignment was the work schedule itself, which included mandatory days off. In the , wildland firefighters typically work 14 days, then have two days of rest. In , and the other Americans worked six days, then had two days off before reporting back to the fires.

Downs took advantage of the time to travel around . He and other Americans visited the Queen Victoria Market in , an open air market where nearly any type of goods could be purchased. “Everything’s negotiable,” said. “That was my attitude going into it, and I was right.”

He toured the coast, with a stop at to view the famous colony of Little Penguins that live there. He also drove the , where he saw koalas in trees next to the highway, to the off the coast of .

Before returning to the United States, he took in the pre-season championship game for the Australian Football League, which was developed as a cross between rugby and American-style gridiron and features several elements uniquely Australian. The league spans the country but is based in , where the fan base is large and the game wildly popular.

In his time spent around the Victorian countryside, noted the efficiency with which the Australians handled water. “Most people have rain water collection systems and gray water collections systems to water their lawns and gardens,” he said. “You see that kind of stuff advertised everywhere.”

He also appreciated the fuel efficiency of the Australian vehicles. “I saw maybe five full-size pickups the whole time I was in that country,” he said. “They mostly used vehicles with small diesel motors. They’re way ahead of us on better fuel efficiency.”

Downs returned to March 15th, moving through 17 time zones on a 15-hour flight to the . He was happy with his choice to make himself available for the assignment. “I like [working on] fires and I thought it’d be neat to go to ,” he said. “If I had the chance, I’d return.”

The group of Americans included personnel working in logistics, planning, and public information, along with liaison officers, a 20-member interagency hotshot crew, and more than two dozen people specializing in rehabilitation. Downs was the only firefighter from , with 13 other states represented, including , and . While works for the USFWS, other firefighters came from the Bureau of Land Management, U.S. Forest Service, National Park Service, and Bureau of Indian Affairs.

The exchange between the two countries has proven successful. “This is a time of year when not much is going on (with fires) in the ,” said, “and when they’re here, it’s wintertime for them. You get to see how another part of the world operates, and this supplies resources when you need them.”