One of Kenmare's oldest businesses, Farmers Union Oil Company, celebrated its diamond jubilee last night during its annual member meeting. "It's here for the long haul," said Greg Westlake, general manager since 2000. "We can do everything for the customer. We can sell them machinery, fill their tanks, sell them their batteries, and handle their agronomy needs." 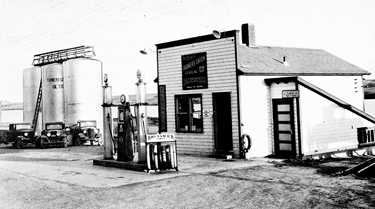 “It’s here for the long haul,” said Greg Westlake, general manager since 2000. “We can do everything for the customer. We can sell them machinery, fill their tanks, sell them their batteries, and handle their agronomy needs.”

The co-op employs 63 people, with serving as the ninth manager in the co-op’s history. The current board includes Julius Brekhus as president, Laury Hennix as vice president, Ryan Aufforth as secretary, and Tim Hegstad and Kevin King as directors.

Opened May 7, 1934, the first sales ticket was made out to Leslie Brooks for grease and oil he purchased from the first manager, Hans Sandie. Sandie was instrumental in launching the co-op, along with the original board members George Sigloh, president, Andrew Meland, vice-president, Martin Jessen, secretary-treasurer, and Austin Waldron of Norma, director.

Sandie and the others started their efforts in the fall of 1933, using $2,800 raised from area farmers to try to buy the Smith Oil Company of Niobe, but that owner refused to sell to a co-op and the money was returned.

The 1934 Farmers Union Company board tried again in March of that year, collecting only $1,425 from producers hit hard by poor weather and economic conditions. John Bauer broke ground for the new business with his team of mules and a scraper on a site at the southwest corner of Kenmare’s downtown square that had been used as an ash dumping ground for years.

According to Sandie’s account, several local businessmen were opposed to the idea of a farmers’ cooperative and asked the fire department to turn the hose on the workers to drive them out of town. “It didn’t happen, of course, but that was the beginning of our oil company and creamery at Kenmare,” Sandie said in “The Story of a Cooperative,” published 25 years after Farmers Union Oil Company opened. “It was built by a lot of hard work and opposition.”

Bulk oil sold for 55 cents per gallon in that first year and 86 members attended the first annual meeting. By 1936, Farmers Union Oil was selling ice boxes and radios to local customers.

Through the years, the co-op continued to grow and respond to the needs of its patrons, adding sales of farm equipment, fertilizer, propane furnaces and hardware among other things. Today, Farmers Union Oil is known for its machinery sales, a broad range of hardware selection and machinery parts, and an extensive repair service that handles everything from tractors, sprayers and combines to the family car.

The first station in downtown Kenmare was expanded in the 1940s, again in the 1950s, and a third time before relocating in the 1990s to its present site along U.S. Highway 52.

The co-op has responded to changes in the communities it serves, operating garages, bulk plants and stations in Norma, Niobe and Flaxton for a number of years and purchasing Dakota Propane in . They also purchased the Powers Lake Farmers Union Oil operation.

The C-Store convenience store in Kenmare was opened in 1991, and serves as a major draw for both local residents and travelers. “The C-Store continues to do well,” said. “Our thought was to get it up by the highway and let them come!”

The co-op also supports civic activities and projects in the communities it services, with donations made through the decades to swimming pools, volunteer fire departments, centennial celebrations, ambulance services, churches, the local hospital and more.

Co-op has grown to
$45 million business

Today, fuel and agronomy sales provide the bulk of the company’s business, especially with the recent addition of the new fertilizer plant. “Agronomy is probably the biggest retail sales for us,” said.

Despite the uncertainty of the economy in several parts of the country and locally extreme winter conditions that could delay planting, was optimistic about continued success for the co-op. “We had a very good year last year,” he said. “The farmers here are good to support the co-op. We have pre-sold a lot of chemical and a lot of fertilizer for the 2009 growing season.”

He also cited strong trends in agronomy and machinery sales, as well as pre-sold diesel fuel. “They’re not backing off a bit,” he said of the area’s producers. “They’re going to go for it.”

expected Farmers Union Oil Company to continue its presence in Kenmare and the surrounding area indefinitely. “We appreciate the patrons’ continued support through these past years and hope to be there for them in the future,” he said. “With their support, we can be.”