Kenmare couple in collision with moose

“You don’t think of them being there,” said Richard Anderson, Kenmare, two days after hitting a moose on U.S. Highway 83 north of Glenburn. “You might see one once in a while off in the distance. Deer, sure, but [a moose] was the last thing on my mind.” 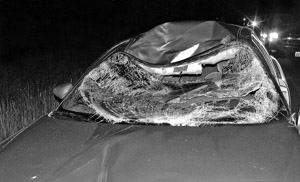 Crushed by a moose . . . Richard and Marilyn Anderson

walked away from a collision with a moose on U.S.

Highway 83 September 28th, but their Buick was totaled.

The Andersons sustained minor injuries from the accident.

headlights, but he noticed the reflection from the animal's nose

in time to hit his brakes. He now cautions other drivers

to look out for both moose and whitetail deer

roaming around the area this fall.

“You don’t think of them being there,” said Richard Anderson, Kenmare, two days after hitting a moose on U.S. Highway 83 north of Glenburn. “You might see one once in a while off in the distance. Deer, sure, but [a moose] was the last thing on my mind.”

Richard’s wife Marilyn was a passenger in the couple’s Buick at the time of the accident. The evening encounter totaled the car.

The were returning to Kenmare after Homecoming coronation ceremonies held September 28th at . They watched that evening as their granddaughter Kiah Smith was honored as the homecoming queen.

“It was about 9 pm and so dang dark out,” said Richard, describing the sky as cloudy, which didn’t help with the visibility. He said the young bull was standing on the center line on the highway, and he didn’t catch a glimpse of it until his car lights reflected off the animal’s light brown nose.

“All you could see was a big old black lump,” he said. “I hollered, ‘Moose!’ and hit the brakes. He just kept getting bigger and bigger. It was just like slow motion.”

Richard can’t remember the actual impact of the collision. “For a second or two, it’s like you’re blank,” he said. “Then I realized I was headed toward the ditch and had my foot on the brake.”

The moose grazed the bumper of the ’s car so lightly that the airbags failed to deploy. However, the animal landed solidly on the hood and its body smashed the front window. The moose’s head and body then wrapped around the driver’s side and struck the back window and trunk.

The impact stopped the car and killed the bull, which landed in the ditch. “I felt a little pressure on my head,” said Richard. “The glass was just shattered, like sand almost. We had it on our backs. I had it in my clothes and down in my shoes. Both of us were wearing glasses, and that probably saved our eyes.”

The driver directly behind the Andersons, Rodney Conway from Westhope, stopped to help the couple. “He said it looked like someone dumped a whole bucket of litter on us,” Richard recalled. “When I stopped and looked back, there was a hundred feet of glass all over the road.”

The both stepped out of the car and walked away from the crash, taking photos with the camera they’d used during Glenburn’s Homecoming festivities. Richard described their injuries as bumps, bruises and a few cuts, with some back and neck pain that has been examined by a chiropractor. “I think we’re damn lucky,” he said.

He added that Marilyn had adjusted her seat to move back, in preparation for a nap on the way home. Observing the way the moose’s body crumpled the windshield frame on the passenger side, he believed her actions may have saved her life or at least prevented more serious harm.

In fact, the next day when Richard looked over his car, he noticed an undisturbed pile of moose fur on the floor, where it would have landed between Marilyn’s feet. “We got more worried about it a day and a half later when we looked at the pictures!” he said.

The ’ son-in-law, Carl Hubble of Lansford, was also traveling behind the couple that evening. When he came to the scene, he called the Bottineau County Sheriff’s Department, who arrived to help and brought a game tag at the couple’s request. “[Our car] was a $7500 bullet,” Richard joked.

He delivered the animal to Gartner’s Jack & Jill in Kenmare for processing. Owner Arlen Gartner estimated the young bull weighed between 900 and 1000 pounds. “He was awful long,” said Richard.

He emphasized the element of surprise at seeing the moose on such a busy highway and cautioned other drivers to be prepared on the roads this fall. “You always think you can get out of the way,” he said. “But they’re so big, and you can’t see nothing on either side of them.”