The Kenmare Rural Fire Protection District now officially exists, according to the State of North Dakota. 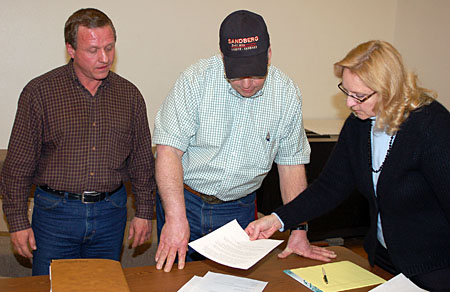 Getting on with business . . . WIth the official organization of the Kenmare
Rural Fire Protection District, already in operation for decades, newly-elected
vice-president Lowell Nelson, left, and president Bruce Ankenbauer, center,
review paperwork required by the state of North Dakota with Ward County
Auditor Devra Smestad. The rural fire district, which covers 14 townships, was
established January 13th in Kenmare during a special committee meeting
of commissioners from Ward, Renville, Mountrail and Burke counties.