Area residents had their first chance to hear about the Green Power Express last week during meetings held in Kenmare, Berthold, Bowbells and Minot with Curt Johnson, a principal of Hartland Wind Farm, and Joe Dudak, vice president in charge of special projects with ITC Holdings of Novi, Michigan. 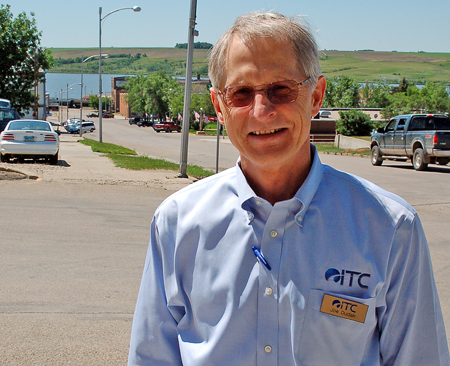 Area residents had their first chance to hear about the Green Power Express last week during meetings held in Kenmare, Berthold, Bowbells and Minot with Curt Johnson, a principal of Hartland Wind Farm, and Joe Dudak, vice president in charge of special projects with ITC Holdings of Novi, Michigan.

After Johnson offered an overview of the proposed 2,000 megawatt Hartland Wind Farm project in Ward, Burke and Mountrail counties, he introduced Dudak and the Green Power Express.

“What does the Green Power Express mean to us?” Johnson asked. “It is a major, major part of this project. We knew we had a great resource in the wind. More important are the people in this area and those who have committed [to the project] so far. But without the Green Power Express, the economic opportunity wouldn’t exist.”

Dudak made his first trip to the northwest corner of last week and spent time visiting directly with landowners as well as talking with newspapers, radio broadcasters and TV news reporters about ITC and the concept of the Green Power Express.

“We are a federally regulated utility that does only transmissions investment,” he said, describing the upstart ITC Holdings, which began operations in 2003 and oversees 15,000 miles of transmission lines in , , , and . “We move energy resources from sellers to buyers, and we wanted to grow where renewable energy needed a champion.”

He compared ITC’s vision to the concept of a superhighway, maintaining an independent service for other utilities to transport power.

“We’re nationally scoped,” he said. “That means we don’t have a territory like many companies do. We have to interphase with the local utilities.”

Dudak emphasized the need for energy projects, like the proposed Hartland Wind Farm, to have a way to ship their power to larger markets as continues to develop and export energy. “The load for the whole state of is something like 2,000 megawatts,” he said. “Think about that. When Hartland Wind Farm is fully developed, it could power the entire state of .”

According to Dudak, no 765 kilovolt lines currently exist in the midwestern region of the country. “We propose to expand that through the Dakotas, move the energy to where we would tie in to the existing [high voltage transmission] network to get this power to the East Coast. You could sell energy in , , , wherever, and the price is probably three times what we pay here.”

The western side of the project extends into northwestern , with the capacity to support over 20,000 megawatts of new wind generation, as well as power from other sources.

Dudak described the current transmission system as developing around clusters of customers over the decades, without a large-scale, comprehensive plan. “The system acts like islands with extension cords,” he said. A project focused on the national scale, such as the Green Power Express, would have the capability to transport power from several sources and prevent or reduce brown-outs and black-outs, such as those experienced in areas with heavy power usage.

He compared the plan to the idea of farmers trying to transport grain to market if they were restricted to dirt roads. “We can improve the transmission grid by putting in a superhighway,” he said.

Dudak and Johnson agreed that construction of the first phase of Hartland Wind Farm and of the Green Power Express could occur in such a manner that transmission would be available when the new wind turbines were operational. Dudak also noted that ITC was interested in building transmission capacity to meet their customers’ needs. “If more customers want to participate, we’ll enhance the size we have proposed now,” he said.

According to Dudak, ITC can be prepared to break ground on the project by February 2011. Various engineering, permitting, siting and other processes are underway, but one major factor is the $20 billion price-tag, which ITC would like to see paid by all the customers who benefit from the power, not just by the energy producers.

“Transmission is five percent of the delivered price of electricity,” Dudak said. “We believe the cost for this should be spread over the customers in the 36 states that would receive the power, to the tune of cents per month on your electric bill.”

No project of this magnitude has been done before, and a rate change to absorb the cost of new transmission would require federal and state action. “I’m up here looking for your help at the next stages of this process,” Dudak said. “When this comes before the North Dakota Public Service Commission, we’ll want letters of support.”

He continued, “This is the least-cost solution for building out the grid. The high voltage network makes that large of a system twice as cost effective as the next largest system. If we’re planning for the long-term, this big fix is the right thing.”

He mentioned the impact of the 22 letters provided by landowners in when ITC completed their first filing with the Federal Energy Regulatory Commission (FERC) last spring. “That made an impression with them,” he said.

Dudak and his associates are already cooperating with the Western Area Power Administration (WAPA) and the Midwest Independent Transmission System Operator (MISO), both of which have given initial approval for the project. “We’ve talked with the governors of and , and they’ve agreed to support us,” Dudak said. “Each of the public utility commissions supports us. We need to work at convincing Congress and FERC that you shouldn’t pay for the line by yourself.”

He also mentioned the importance of cooperation with existing utilities, all of which would benefit from the Green Power Express. “This line will remain independent,” he said. “We expect to partner with at least 22 utilities involved in and , but this is the first project this big ever proposed. We’re pushing the envelope on getting this project across.”

He explained that as mandated by FERC, the high voltage transmission line would have to take any customer that is a qualified generator of power, whether from wind, coal, natural gas, solar or other means.

Johnson kept his comments brief, announcing that the project had grown to more than 115,000 acres with 200 landowner documents returned.

He noted Hartland Wind Farm’s commitment to paying the increased taxes that will result from the placement of turbines. “You put up one turbine at $4 million and that $25,000 in taxes per year,” he said. “We’re going to work to get these dollars back into the areas that are impacted [by Hartland Wind Farm] the most.”

He also took a few moments to review several changes for wind developers as outlined in HB1509 and signed into law by Governor Hoeven. The new laws, most of which were standard procedure for Hartland Wind Farm, take effect by August 1, 2009. Johnson said landowners who already signed with the project would be receiving updated communications from his office regarding any impact resulting from the legislation.

Johnson and Dudak discussed further plans for coordinating construction of the wind turbines and transmission lines. Johnson and Craig Swenson, another principal with Hartland Wind Farm, explained that while things may appear quiet at the present time, the company has been busy with the permitting, design and engineering aspects of the project. “Our schedule right now is to start Phase I by mid-April 2011,” Johnson said. “We would finish that first 500 to 800 megawatts by December 2012.”

ITC’s plan for beginning construction in in the spring of 2011 calls for finishing a line to transmission during the first quarter of 2013, just in time to send wind-generated electricity to market.

“We take on the interconnection costs, and that responsibility, as part of the system. We can afford that,” Dudak said. “We’re separate companies, but we’ve got to work together to get the timing to come out. We’ll need help to get that energy and make sure it moves.”

The first steps in transforming the Green Power Express from a proposal to reality have been taken, with the rate detail already filed with FERC. Dudak said ITC continues to work at partnering with utilities that would be involved in supplying power and to coordinate plans and operations with MISO. ITC intends to file a siting application with the North Dakota PSC by the end of December and to keep communicating the need for a change in the cost allocation of the project to members of Congress and FERC with the goal of new legislation regarding electric rates.

Persons interested in more information about the Green Power Express, or in providing letters of support for the project, can contact Dudak by mail at Joseph Dudak, Vice President, ITC Holdings Corp,,

Further details about the Green Power Express can also be found online at www.thegreenpowerexpress.com.

Dudak laughed as he said he truly hoped to be swamped by requests for information and offers of support. “I plan on being in one of the every week and give everyone a person to contact,” he said. “I want to hear from landowners. I want to be inundated!”