As Enbridge Pipeline LLC works on the details for an $8.9 million proposed expansion of their Berthold facility, representatives from the company predict the community’s name will be forever linked with oil production in the Bakken field. “Berthold will represent Bakken crude,” said Kelly Wilkins, a senior business consultant with Enbridge. “Everybody’s going to know it starts at Berthold.” 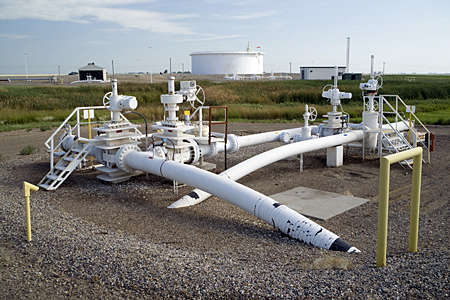 Berthold will represent Bakken crude . . . Enbridge Pipelines
North Dakota is proposing an expansion to its Berthold station to accommodate growing Bakken production. The project,
which could begin later this summer, will consist of
reactivating the current 80,000 barrel tank,
construction of approximately a quarter mile of new pipeline,
and adding up to eight new truck unloading units.

As Enbridge Pipeline LLC works on the details for an $8.9 million proposed expansion of their Berthold facility, representatives from the company predict the community’s name will be forever linked with oil production in the Bakken field.

Wilkins spoke to members of the Berthold Economic Development Corporation and other community residents during that organization’s annual meeting held April 26th. He was joined by Kesley Myhre, community relations advisor for Enbridge, and Cathy Dunn, the senior engineer on the Berthold expansion project.

Myhre reminded the group of Enbridge’s activity in the area, including the 1996 purchase of the Portal Pipeline that transports oil from a point near Berthold into and the company’s work to move oil from 22 fields across and . Projects completed last year allow the company to move 161,500 barrels of oil per day (bpd).

Wilkins described the former Portal Pipeline as the most direct route out of the state for transporting oil, with that pipeline connecting to Canadian pipeline systems that eventually move oil to refineries. “We have an abundant supply of oil here, but transportation restraints,” he said. “Now, we’re going to lay another 16-inch pipeline next to the existing pipeline to give the customers capacity.”

An upgrade to Enbridge’s Berthold Station would be the first key to success for the entire expansion project, along with bringing the Portal Pipeline back into service. Dunn explained that 80 acres of land east of the existing station in Berthold would be necessary to move forward with plans to upgrade the truck unloading facility. A quarter mile of new pipeline would be installed there, along with reactivation of an 80,000 barrel storage tank.

“We’ve completed the environmental work at this point,” Dunn said, adding that the assessments showed the project would have a low impact on the site.

Construction on the project could begin by August 2010, with completion expected by November 2010. “We would place it in service by late 2010,” said Dunn. “There would be an increased injection capacity of 15,000 barrels per day into the line, then eventually into the Portal line.”

Dunn and Wilkins explained a site east of the existing facility was selected for the proposed project to avoid having to cross U.S. Highway 2 or the railroad tracks. “We’ll add the tanks on the north side,” said Wilkins.

The Enbridge site stands outside of the Berthold city limits, but Wilkins and Myhre emphasized the company’s interest in hearing community concerns about the proposed expansion. “We want to do this the right way,” Wilkins said. “We’re going to be here a long time.”

One member of the audience asked about the economic impact that Berthold could expect as a result of the expansion. Wilkins pointed out that during the construction phase the local businesses, especially the restaurant, gas station and convenience store, could expect to see more foot traffic. Some local sub-contractors may be hired for the project and the local real estate tax base would be enhanced.

On a broader scale, the expansion would provide tax benefits, more energy-related jobs in the region, an improved real estate market, and access to a secure and reliable source of energy.

He also explained that the expanded Berthold facility would be secured in a manner similar to the facility, with fencing and cameras. Enbridge personnel would be dedicated to the Berthold facility, but the proposed expansion may not lead to additional permanent jobs at the site immediately.

The construction proposed for 2010 would be the first of four phases in a larger expansion project for the Enbridge pipeline system through Berthold.

Some members of the audience expressed their concern that the Enbridge expansion would limit Berthold’s growth in that direction. However, Bob Inman, president of the Berthold Economic Development Corporation board of directors, called the proposal an economic boom to the community and praised Enbridge for their presence in the area.

John Fjeldahl, who serves as a Ward County Commissioner, agreed. “They’re a good community business,” he said. “I would hate to discourage them so much that we don’t have a good relationship with them from the get-go. This is going to be a major facility. That’s a positive thing.”

Berthold mayor Alan Lee said the city council had discussed the proposal. “They’ve been good neighbors,” he said, adding that he wanted members of the community to keep talking with Enbridge representatives to get their questions and concerns answered.

“We’ll have to have a couple of public meetings for input,” Inman said, adding that one issue for both Berthold and Enbridge would be traffic flow and congestion near the truck unloading facility. Another topic that Lee would like to see discussed further is related to the zoning area for the city and the township, and how the Enbridge expansion would be included.

Myhre emphasized that Enbridge representatives would keep hearing and considering the concerns of Berthold residents regarding the proposed expansion. “We will be attending another city council meeting,” she said. “We want to keep the lines of communications open.”

“It’s nice to get all these questions answered and concerns out there,” said Lee, “before [the expansion] starts to happen.”