Members of the Berthold Economic Development Corporation and other interested residents had their own introduction to drilling for oil in the Bakken formation from Lynn Helms, director of the North Dakota Department of Mineral Resources Oil & Gas Division. “This has the potential to change North Dakota the way Prudhoe Bay changed Alaska,” he said. “This is a renaissance for North Dakota.” 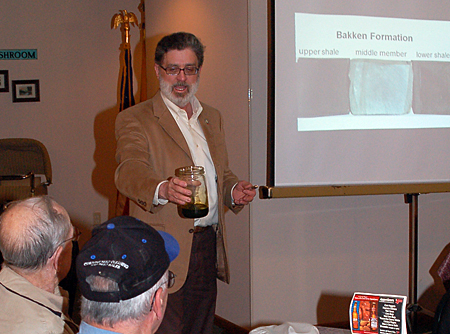 North Dakota's liquid gold . . . Lynn Helms, director of the
North Dakota Department of Mineral Resources Oil & Gas Division,
hands a jar of sweet crude oil pumped from one of the Bakken
wells to members of the Berthold Economic Development Corporation.
Helms described current and expected activity in the northwest
counties of the state, and offered some predictions

for oil development in Ward County.

Members of the Berthold Economic Development Corporation and other interested residents had their own introduction to drilling for oil in the Bakken formation from Lynn Helms, director of the North Dakota Department of Mineral Resources Oil & Gas Division. “This has the potential to change the way Prudhoe Bay changed ,” he said. “This is a renaissance for .”

The presentation about oilfield activity and the geology of the Bakken and Three Forks formations led the agenda for the Development Corporation’s annual meeting, attended by about 30 individuals on April 22nd.

Helms used a series of maps and charts to describe an overview of the state’s energy and mineral resources actively being recovered or studied, including coal, wind, potash and natural gas. He acknowledged that ’s light, sweet crude oil had taken center stage, however, with 112 rigs working in the state as of this writing.

“They’re all drilling in the Bakken and Three Forks in northwestern ,” he said.

Helms held up a jar of crude oil pumped from a Bakken well and asked members of the audience to note its appearance and smell as they passed it among the group. “This is seven-tenths the density of water, and low sulfur,” he said. “You can turn 100 percent of this into gasoline and diesel, so it’s preferred by refineries. This comes from the middle layer of the Bakken shale, and it took 21st century technology to unlock it.”

Helms shared shale and liquid samples and scale models of various drill bits to explain the basic process of drilling for and producing oil from the Bakken. The horizontal wells use precision technology developed and previously classified by the federal government to steer missiles. “From four miles away, in the ground, we can tell within a 10-foot circle where that drill bit is at,” Helms said.

The demands seem enormous for the hydraulic fracturing process used to release the oil from the shale, with three million gallons of water and 4 million pounds of sand required per well. “The goal is to create thousands of cracks,” said Helms.

The technology continues to improve. Wells in the Bakken formation that once took up to two and a half months to complete are now finished in three weeks or less. And Helms expects the industry to maintain a presence in the state for the foreseeable future. “We think we’re going to drill another 15,000 to 20,000 Bakken wells,” he said. “The oil producers tell us they will be here 10 to 15 years, but then they plan to develop increased density wells.”

He rattled off a set of impressive numbers related to each working rig, with a well now costing an average of $6.4 million to complete. “Typically, the drilling companies spend $109 a second from the time they set up the rig until they move it off-site,” he said. “Around each rig, 120 people are working. Forty of those are directly on the rig, and 80 are in jobs associated with oil production. Also, it takes 800 semi-loads of material per rig. That’s an average of one semi-load per hour for four to five weeks, and you know what that’s like on your roads. The state legislature is going to be discussing how to meet the counties’ infrastructure needs.”

While members of the audience were familiar with the sight of oil pumpers sprouting across the prairie, Helms explained the concept of pad drilling, which will concentrate four or six wells in a smaller area with less impact. “Instead of six individual well pads of five acres each, there would be four square miles in a unit with one 10-acre pad,” he said. “The well heads would be spaced 50 feet apart, going different directions.”

He also talked about a new drilling rig designed for use on the pads that could actually move itself to each new drilling location. “It can stand up and ‘walk’ to the next well site, going about 50 feet in five hours,” he said. “They just finished building a pad drilling site by Ross, and the rig will be coming in soon. We’ll be shooting video for YouTube to show that.”

Helms said his office was working on environmental studies with Ducks Unlimited and the U.S. Fish & Wildlife Service to review the impact of oil development on waterfowl production and sage grouse habitat, and with to determine changes to farmland and crop production. “We anticipate that pad drilling will reduce the loss of land,” he said. “These pads are going to be a closed loop drilling system, with four miles of undisturbed ground in between them.”

He described a plan for dual pads, with three Bakken wells and three Three Forks wells originating from the same location. “That should cut the number of semi-loads by at least a hundred,” he said, “and the first 20 percent of the frac water coming out from one well can be recycled to the next frac job there.”

According to Helms, Hess Corporation is pursuing the design for the six-well, dual pads, while Continental Resources intends to work with a design for four well pads.

Of course, with the current oil production in the state at 260,000 barrels per day (bpd) and expected to increase to 400,000 or 450,000 bpd as the Three Forks formation is more developed, transportation becomes another issue. Helms noted current pipeline capacity is about 280,000 bpd, while the rail station can ship 60,000 bpd and the refinery at can handle 58,000 bpd.

“All of that capacity is going to be full by this time in 2012,” he said. “We have two years to prepare for expansion.”

He connected Berthold to that development, with Enbridge Pipelines North Dakota proposing an upgrade to their Berthold facility to include reactivation of the old Portal Pipeline with a route from Berthold into the Canadian pipeline systems.

“This is destined to become a major shipping pipeline out of ,” Helms said. “The exciting thing will be the jobs, the construction and the people coming to Berthold to make that happen.”

Helms spoke briefly about plans to reduce the amount of gas flared from the well sites, including a project to double the capacity of the Tioga gas plant and to develop a gas plant in eastern . He also referred to the need for housing workers in the area, with crew camps already planned in the Williston and areas.

Then he turned to the question on the minds of many members of the Berthold audience: the potential for more oil activity in . Referring to one of his maps again, he showed the outline of the eastern edge of the Bakken formation and pointed to counties west of the Berthold area. “On this side of the Bakken line, we have a 99.9 percent-plus chance of producing oil,” he said. “And the oil companies have a 90 percent chance of making money with oil prices at $70 per barrel.”

He continued, “On the eastern edge, the geology is more complicated, but we’re still projecting will become a player. Wells drilled here average 115 bpd, which is weak for Bakken and Three Forks wells, but that’s using two-year-old technology. At today’s oil prices, 200 bpd is what we want to see for the initial production rate before it’s a money-maker. Then we’ll be off to the races here again.”

He estimated that 550 wells would be drilled in as soon as the technology could be improved to maximize production from the Three Forks formation. “We’re convinced there’s Three Forks potential out here,” he said.

More specific information about activity in ’s oil patch can be found at the ND Oil and Gas Division website at www.dmr.nd.gov/oilgas/. A link on that page to the “Director’s Cut” will take readers to Helms’s monthly updates and comments about oilfield activity.