Denali Development is open and ready to do business in the Kenmare area. 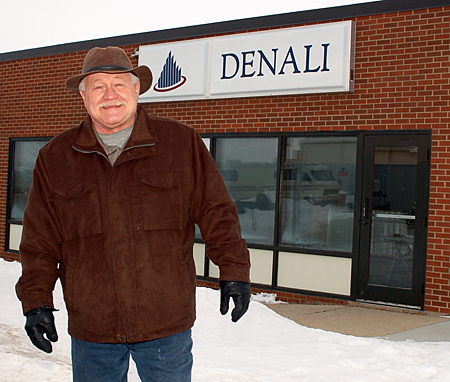 Denali Development is open and ready to do business in the Kenmare area.

Actually, the office in the front of the former Motor Service building on Central Avenue has been operational since managing partner Russ Gilson arrived last November. The space has served as a meeting area for local landowners, principals with Denali Energy, and project managers with Hartland Wind Farm to discuss the proposed wind project and option and easement agreements.

Gilson now welcomes visitors as he considers renovations to the space, rented from Kenmare Wheels & Meals, complete except for expanding the electrical wiring to better accommodate the office’s equipment.

More specifically, he invites people with interests in energy, development, investment and/or real estate to contact him.

The office serves primarily as the local hub for Hartland Wind Farm. Two work stations are set up behind counters fronted with corrugated steel, while four groups of tables and chairs provide additional work and meeting space for Hartland Wind Farm personnel during their biweekly visits to Kenmare from Denali’s main office in Baxter, Minnesota.

Gilson has paid homage to the area’s potential for wind development by exhibiting original paintings by local artists Tami Gravesen, Gloria Gustafson, Jane Kalmbach and Barb Scherbenske, as well as a painting by the late Gladys Gilson of South Dakota. All five pictures include some reference to wind power, with modern wind turbines, traditional prairie windmills and Kenmare’s Danish Mill as the featured subjects.

Gilson’s role for Denali has expanded along with the proposal for Hartland Wind Farm. "The original idea was to build this for the wind farm," he said. "Now, we’re looking at everything in quite a range, from rental units to homes to townhomes."

Denali Development is also considering sites and plans for additional offices, repair facilities and controlled areas for equipment and supplies for the wind project. "We have quite a bit of land already, and we’re looking at more," Gilson said.

Although headquartered in Kenmare, Gilson is exploring potential locations for development in Bowbells, Berthold, Stanley and Tioga. "We want to have housing for all our people and keep them reasonably close to where they’re working," he said.

Hartland Wind Farm is designed as a 2,000 megawatt project to be completed in three phases, with about 1,200 turbines estimated for placement across Burke, Mountrail and northern Ward counties. Project managers are working toward easement agreements with landowners signed for 40-year periods, with possibly two generations of technicians employed by the project through those decades.

Current plans call for crews of 1 to 3 technicians assigned to clusters of 10 turbines, and Hartland Wind Farm is already communicating their need for future employees with technical programs that focus on wind energy development. Gilson wants to be sure those individuals and their families have a comfortable place to live when they arrive. "Housing is our first priority, and probably the least complicated," he said. "There seems to be a need for it here."

Gilson has enjoyed his reception in Kenmare, where he purchased a home last fall, and he predicts other newcomers with the wind project will appreciate the community. "I’m amazed at how comfortable I feel here," he said. "I’ve been welcomed by people in this city."

He also believes Kenmare residents are ready to upgrade the existing housing options. "What I see in this town is that people are proud of what they have, and they keep things together," he said, adding that the occasional neglected house or lot stands in need of obvious help. "If anybody has a project they’d like to talk about, I’d be very interested."