Just three months ago, the owners of two downtown Kenmare businesses were looking forward in anticipation of the rush of the Thanksgiving and Christmas holidays. 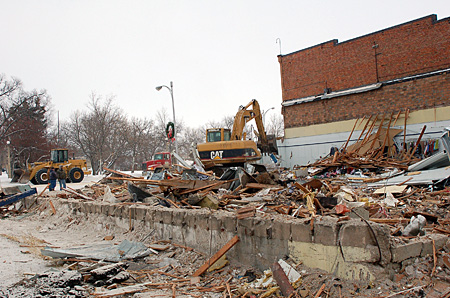 Roof, walls and all are reduced to one big pile of rubble
as Harris Construction works to demolish the former
Danny's Bar & Grill and R$ & Variety on the west side
of Kenmare's downtown square.

By Terry Froseth
Just three months ago, the owners of two downtown Kenmare businesses were looking forward in anticipation of the rush of the Thanksgiving and Christmas holidays.
Then, on November 25, the day before Thanksgiving, an early morning fire put the adjoining businesses out of business.
Harris Construction started demolition of the fire-damaged structures on the morning of February 10. Within a few days, the “west side” businesses were leveled and the lots cleared.
As the work began, Kirk Harris of Harris Construction estimated they would haul about 100 loads to the city landfill.
The future of the vacant business lots remains uncertain.
The owners of Danny’s Bar & Grill, Danny and Sara Schlosser, have relocated and are now leasing the South of the Border Bar & Grill at Kenmare’s north edge.
The other destroyed business, R$ and Variety store, was owned and operated by Rory and Renee Stroklund. The Stroklunds have not announced any future plans.
The shared building for the two businesses was originally built in 1947, following a fire that destroyed the Gambles store and the Travel Inn Tavern. 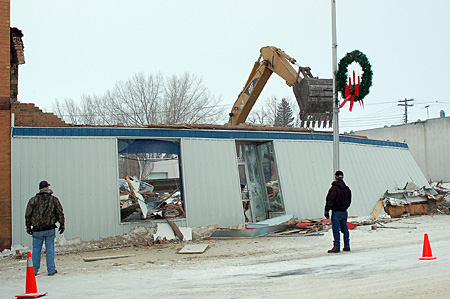 The front wall of R$ & Variety falls all at once
after a tug from the track hoe bucket.
Prev Next