The signs and stickers worn by the Kenmare students said it all last Wednesday: “I’m walking for Alex” and “I support Alex.” 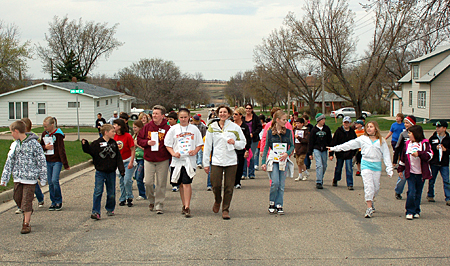 The signs and stickers worn by the Kenmare students said it all last Wednesday: “I’m walking for Alex” and “I support Alex.”

Gusty winds and cloudy skies couldn’t diminish the enthusiasm of the student and adult walkers who turned out to support fourth grader Alex Emeline. The fund-raising walkathon was organized by the Kenmare PTA to benefit Alex and his family as they cope with the effects and expenses of non-cancerous brain tumors that have plagued his health and restricted his ability to walk.

For his part, Alex rode the route in fine style, seated in a golf cart decorated with its own sparkling sign and chauffeured by school aide Cheryl Miller. Alex revised the sign he wore for the event to read, “I’m riding for myself!”

His classmates walked with the fifth and sixth graders and several parents, led by teachers Kathy Schumacher and Donna Schmit as Terese Skjordal and superintendent Duane Mueller took charge of stragglers at the back. The group paraded around the northeast side of town and made an impact as they walked the frontage road along U.S. Highway 52 by encouraging every semi-truck driver who passed to honk his horn in greeting.

The kids also patted friendly dogs, told jokes and stories, accepted a donation to the cause from a passing driver, and welcomed Alex’s mother, aunt and little sister Zoe to join the group.

One highlight of the hour-long walk came as Alex’s entourage passed . Students from each grade in that building gathered outside with their teachers to wave and cheer the walkers, with Alex’s sister Natalie and her first grade classmates stationed next to the street to shout their hellos.

The grade school group returned to their classrooms, with water and snacks donated by Super Valu and Gartner’s Jack & Jill to boost their energy after all the exercise, just as the high school classes prepared to take their leave for an hour’s walk.

Between the walkathon and free will donations received the previous night at the music concert for kindergarten through third grade students, nearly $11,500 was collected for Alex. Two enterprising high school sophomores, Charles Steinberger and Alex Grosser, also designed a FaceBook event page for the walkathon with dozens of responses recorded.

Thrivent Financial for Lutherans matched $800 in donations, and the Kenmare PTA raised $975 for Alex at a concession stand they operated during the Kenmare 5th and 6th grade girls round robin basketball tournament held earlier in April. Donations poured in from out-of-state friends and readers of The Kenmare News, as well as from generous residents of the city and surrounding area.

For their part, the fourth grade class raised $2,461.22 to win the pizza party challenge issued to the 4th, 5th and 6th graders. Ms. Skjordal’s fifth graders collected $1,570.50 for second place, and Mrs. Schmit’s combination 5th and 6th grade class took in donations of $944.50. Because of their outstanding efforts, rumor has it all three grades will share in the pizza reward.

Every student in grades four through 12 who turned in any amount of money on Alex’s behalf for the walkathon received a free movie pass to the Kenmare Theatre, courtesy of Kenmare Veteran’s Club.

For his part, Alex held court in the golf cart, loaned by Brad and Monica Kjos for the afternoon. He teased his friends during the walk, made room for his little sister Zoe to sit with him, and pestered his driver for a turn at the steering wheel. “It was fun,” he said, “but why can’t I drive the thing? I drive the carts in Wal-Mart and I don’t crash into anything there.”

While he may be too young to demonstrate his driving skills, Alex has been practicing with crutches lately. “The doctor told me to use them around the house before I can use them at school,” he said. He has been fitted for leg braces and crutches, and will be exchanging the walker he has relied on since February for a little more mobility.

The change can’t come soon enough for the 11-year-old, who described the way he entered a birthday party held recently at the home of family friends Tony “Uncle Fatty” and Jessica. “Uncle Fatty threw me over his shoulder and carried me up the stairs to his house,” explained Alex, “while my sister carried the walker!”

Kenmare PTA president Fay Froseth was delighted with the response to Alex’s fund-raiser. “It’s amazing,” she said. “And a committee from the PTA will work with Alex’s mom to find out what the priority expenses and needs are for the family, and those expenses will be taken care of through these accounts.”

Contributions are still being accepted at the PTA accounts established on Alex’s behalf at State Bank & Trust of Kenmare and BNC National Bank, until May 15th.

Teacher Donna Schmit, who first suggested the idea of the fund-raiser to the PTA, called the effort a phenomenal benefit. “I feel that the students gained an understanding of Alex’s conditions and have learned to empathize with those less fortunate than themselves,” she said. “That is truly the lesson I hope they hold in their hearts and rather than criticize or tease those who struggle, they will lend a helping hand.” 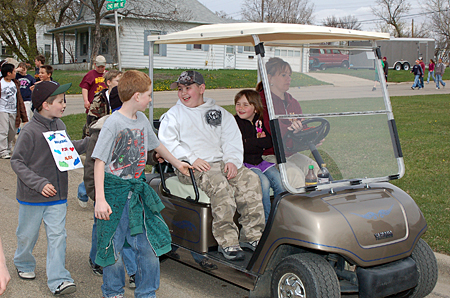 Going along for the ride . . . Alex Emeline, in the cart at left,
jokes with some of his friends during the walkathon held
on his behalf last week. His little sister Zoe enjoys her seat in the
golf cart, while Cheryl Miller safely steers Alex along the route.