The most visible sign of the Northwest Area Water Supply project in the Kenmare area is the new million-gallon storage tower under construction a mile east of town. 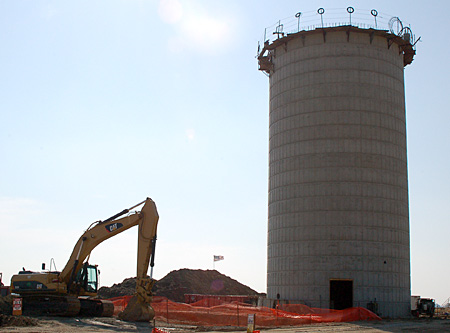 Going up . . . The newest landmark in the Kenmare area is the pedestal
for a million gallon water storage tower along the Northwest Area Water Supply pipeline. The pedestal stands 80 feet tall, but the tank will top
out at 125 feet once the 70-foot diameter bowl is added later this fall.
The tank will supply water in the NAWS distribution line for Kenmare
and the Upper Souris Water District, as well as communities and
water districts north to Sherwood and east to Bottineau.

The most visible sign of the Northwest Area Water Supply project in the Kenmare area is the new million-gallon storage tower under construction a mile east of town.

The pedestal stands 80 feet high and 40 feet in diameter, with a 70-foot diameter tank eventually resting on top for a final height of 125 feet.

The interior of the pedestal will house a small maintenance facility where chloramine levels in the NAWS water supply will be monitored and adjusted as necessary.

Caldwell Tanks of Louisville, Kentucky, is constructing the elevated tank in conjunction with Houston Engineering, contractors for the NAWS project. Information on soil and water conditions was provided by Houston Engineering so the tank’s foundation could be designed specifically for the site east of Kenmare.

This will be the third tank constructed along the NAWS pipeline, and the first of this design. One tank on Speedway Hill at and a second tank near the Berthold Golf Course are both of bolted steel construction.

NAWS project manager Michelle Klose, Bismarck, visited the Kenmare, Sherwood and Mohall areas on September 14th with Alan Walter, Minot public works director, to see the progress firsthand. She noted that four additional storage tanks could still be built for the NAWS system. “All of these will be a little bit different, depending on the conditions,” she said. None may look like the storage tower east of Kenmare.

Kenmare will eventually draw its supply of NAWS water from the tower, to be stored in a new elevated tank scheduled for construction next year. Points north and east of Kenmare will also depend on the tower’s supply, including the Upper Souris Water District, Sherwood, Mohall, Bottineau, Upham and All Seasons Water District.

Klose couldn’t be more pleased with the advances made on the overall project this summer. “It’s been moving really fast,” she said. “It’s exciting to see this much work progressing.”

Northern Improvement handled construction of the Kenmare-Upper Souris Segment, which was nearly completed last week in its route north of town, with about 500 feet left to install.

“That [line] has been pressure tested past Carpio,” Klose said, adding that disinfecting would follow the pressure tests. “Once the pipe is disinfected and has passed inspection, we’ll be looking at turning on water service to Kenmare.”

Work has started on the Mohall-All Seasons Segment, with pipeline running parallel to Highway 5 and north along Highway 28 to Sherwood. “We had a pre-construction conference on August 25th,” said Klose. “Pipe delivery started last week.”

American Infrastructure from bid that segment of the pipeline. “They’re planning an aggressive construction schedule,” said Klose, “and it should be completed by next fall.”

Construction of the pipeline east from the junction of Highways 52 and 5 started last week, along with pipeline construction from Sherwood south along Highway 28. “The boring crew is already working,” said Klose. “They have to bore 3,800 feet under the [Mouse] river.”

In addition to those two segments, work is being done on three other portions of the NAWS pipeline. The All-Seasons Water District will provide water from Bottineau to users in and Upham, with NAWS cost-sharing a water treatment plant for . A bid opening was held September 15th for a short segment at the connection, where less than a mile of pipeline has to be installed, which includes boring under U.S. Highway 52. In the meantime, the Minot Air Force Base-Upper Souris Segment is under design.

The city of approved and signed a water service contract with NAWS on September 14th. The city of had already approved a similar agreement, and Klose was awaiting verification that it had been signed

While much of the completed pipeline is scheduled to carry water supplied by the city of Minot for an interim period until Missouri River water can be treated and used, NAWS officials are waiting for the outcome of a lawsuit filed by the province of Manitoba and state of Missouri to block the project.

The federal judge assigned to the case has permitted construction to continue on the project’s distribution system, but she has prevented work related to Missouri River water intake and treatment for distribution in the NAWS system.
“We’re still under an injunction while we’re able to continue work on the other projects north of ,” Klose said.

The U.S. Bureau of Reclamation completed and submitted an Environmental Impact Statement last year to address concerns raised by the lawsuit, with further arguments then filed by and . “I think the judge wants this resolved,” said Klose. “We did our response to their filing in August. They have a response that has to be filed by September 28th, and we have one final reply that’s due October 28th. Then, we expect to hear one way or the other by the end of the year.”

Klose said the judge could approve a summary judgment or ask for a round of oral arguments. “We’re going to make the request to do improvements to portions of the water treatment plant and intake,” she added. “If we get a summary judgment, all of the injunction is lifted.”

Klose returned to details of water delivery to Kenmare, as supplied by for the interim period. “That will take a little bit of time for start-up,” she said, explaining that NAWS had to coordinate with the city to disinfect lines and finish testing. “We’re pretty excited to get water service in this area. We’ve already pushed water up to here.”

Standing at the base of the new tank’s pedestal, she gestured at her surroundings. “This tank is a lot more visible sign of what’s been going on with the project,” she said, “but the components include construction, design work, the water service contracts, planning for the intake design, design work for the biota treatment plant, and the lawsuit.”

She glanced at the tower of concrete one more time. “This should be finished next summer,” she said, adding that the steel crew will begin their work in October. “This tank is definitely a landmark!”