A fire that started along the Mouse River Sunday afternoon burned an estimated 360 acres and involved the efforts of four departments before it was contained. 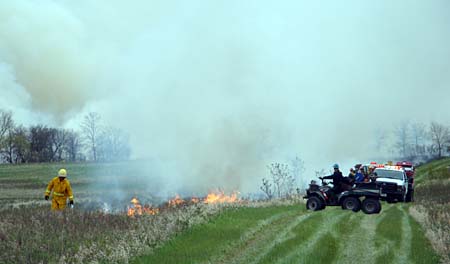 A fire that started along the Sunday afternoon burned an estimated 360 acres and involved the efforts of four departments before it was contained.

The Tolley Rural Fire Department was called to a fire about a half mile northwest of at 1:30 pm on Sunday. Fire chief Shawn Roering said 10 volunteers and four trucks responded to the call. Departments from Mohall and Sherwood also worked on the fire during the afternoon.

The fire burned on land administered by the U.S. Fish and Wildlife Service on the Upper Souris National Wildlife Refuge. Six USFWS firefighters from the , Des Lacs and Lostwood refuges, along with two Type 6 engines and an ATV, arrived to assist the other departments. Darrick Ystaas, fire program technician at the Upper Souris NWR, served as the Incident Commander trainee for the operation.

Ystaas described the fire as occurring on both banks of the river through an area traversed by several oxbows. “It’s a lot of timber along the river and some grassland,” he said. Temperatures for the day reached into the 60s, with a steady wind blowing from the south most of the day.

No structures were damaged as the fire consumed an area that has not been burned in recent times. Ystaas said the USFWS had not done a prescribed burn in that particular area. In talking with members of the Tolley RFD, they could not recall responding to a fire call along that stretch of river either. “There were a lot of dead trees and a lot of matted grass,” Ystaas said. “Even though the grass had greened up, it still burned pretty well.”

He noted that the USFWS had conducted a prescribed fire on refuge land nearby three weeks earlier, and crews used that zone to their advantage Sunday. “We could flank that wildfire to our prescribed fire to help control it,” he said.

The cause of the fire remains under investigation by USFWS law enforcement personnel. Ystaas confirmed that no railroad tracks crossed the area, nor did the region experience any dry lightning that day.

The USFWS and Tolley crews remained on the fire until nearly midnight Sunday. “We got from a half-inch to three-quarters of an inch of rain that night,” Ystaas said. “That helped knock it down.”

Although the fire was contained on Sunday, large trees within the perimeter continue to burn. Ystaas said he and Upper Souris NWR refuge manager Tom Pabian monitored the area on Monday and that other firefighters would continue observing the fire zone through the week to make certain nothing flares up into another wildfire.

Other agencies that responded to Sunday’s fire call included the Renville County Sheriff’s Department and North Dakota Game and Fish.

Ystaas had high praise for the cooperation he experienced among the crews. “I can’t say enough about the Tolley RFD,” he said. “We work well with them in interagency [matters]. We put on a lot of training [each year] for the Tolley folks, and it’s good for these types of situations.”