The discovery of nine sticks of dynamite in a downtown Kenmare building on Thursday shook things up around town as local law enforcement, the Kenmare Fire Department and the Minot Bomb Squad handled the situation. Fortunately, the explosives were detonated later under controlled conditions by trained professionals. The source of the dynamite remains a mystery, however. 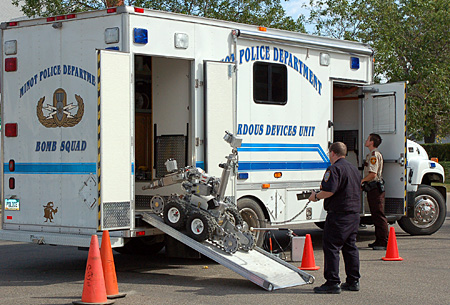 The real deal . . . It was not a drill. THe Minot Police Department Bomb Squad

responded to a call at Kenmare to remove nine sticks of dynamite from the Police Department in the Memorial Hall. Pictured above, an officer of the bomb squad

activates a robot used to retrieve the dyamite.

The discovery of nine sticks of dynamite in a downtown Kenmare building on Thursday shook things up around town as local law enforcement, the Kenmare Fire Department and the Minot Bomb Squad handled the situation.

Fortunately, the explosives were detonated later under controlled conditions by trained professionals. The source of the dynamite remains a mystery, however.

Kenmare resident Jake Smith discovered the dynamite Thursday while cleaning and sorting through materials in the former Kenmare Clothing building on the west side of the downtown square. According to Smith, he and his wife Pam were removing some lumber and other items they had purchased from the building’s owner, Dennis Heesch, who currently lives in .

Smith said he saw the dynamite in a box on the main floor of the building, near some of the 2x4s he was stacking. “I told my wife, ‘I just found nine sticks of dynamite,’” he said. He described the explosives as dry, stored in a cardboard box, some with legible numbers stamped on the ends of the sticks.

Smith immediately contacted Kenmare police chief Gary Kraft, who was technically on vacation, and delivered the dynamite, wrapped in a Christmas stocking he also found in the building, to the police department for Kraft’s inspection.

Kraft said he first spoke with Smith about 1:30 pm Thursday. When he saw the explosives later, he assessed the dynamite as old, with the sticks wrapped in paper and potentially unstable because of their age.

“I called the other patrolmen in to help,” he said. “Then I called the Bomb Squad from the Minot Police Department, and while we were waiting for them to arrive, I called the [Kenmare] fire department.”

Under advice from the Bomb Squad and the other law enforcement officers, Kraft launched an evacuation effort for areas of the community in potential danger from the explosives. With the presence of more dynamite in Heesch’s building still a possibility, residents, businesses and agencies were asked to evacuate the downtown area. Those streets were then secured by members of the Kenmare Fire Department.

Fire Chief Dale Hanson said he was called between 2:30 and 2:45 pm and reported to City Hall, where he was told by Kraft that an evacuation would be necessary. When he paged the firefighters, he sent a message for them to meet at the Hall, where he quickly briefed them on the situation. The department’s trucks and several personal vehicles were used to seal off the downtown square, with the city maintenance vehicles also blocking streets in the evacuation district.

The Kenmare Memorial Hall and surrounding area were evacuated, with the two ambulances, housed in garage attached to the Hall, parked near in case they were needed. City auditor Mary Brekhus also called so administrators there could cancel 5th and 6th grade boys basketball practice scheduled at the Memorial Hall.

“One block in every direction was a mandatory evacuation,” Kraft said. “The county [sheriff’s] deputy and patrolmen went door to door. I called the mayor, to tell him we were closing down City Hall.”

Hanson said he noted the absence of any trains parked on the tracks immediately west of the downtown area. “There were no train cars with any chemicals there at that time,” he said. “The railroad tracks were really outside of the evacuation area, but if there had been cars, we would have had to notify CP Railway.”

The Power Fuels trucks, which fill their water tanks from a city pump on the south end of , were rerouted by the fire department to avoid the downtown area and, in fact, halted their hauling operations for a period of time, according to Hanson.

Members of the Minot Bomb Squad arrived by 3:30 pm with their vehicle and a robot to handle and move explosive devices. Kraft said he watched from a video camera mounted in the Bomb Squad’s truck as the robot was guided to enter the Memorial Hall, pick up the stocking still containing the nine sticks of dynamite, and exit the building.

Hanson worked directly with Sergeant Larry Haug of the Bomb Squad. “They take their time and do their job right,” said Hanson. “There are procedures they go through. You get a different perspective when you’re working with them from what you see on TV.”

“The robot removed the dynamite and placed it in their ‘kettle’ about 5:15 or so,” said Kraft.

That “kettle,” mounted on the Bomb Squad’s trailer, was pulled west of town to the area known locally as Gertie’s Grove, where countercharges were used to detonate the explosives at about 7:30 pm. “The blast was felt and heard downtown,” Kraft said.

Hanson said the explosives amounted to about two pounds of dynamite. “It would have leveled a couple buildings downtown,” he said. He witnessed the detonation, along with other firefighters staffing one of the department’s trucks. “[The explosion] shook the ground,” he said.

Heesch’s building was inspected and cleared by members of the Minot Bomb Squad, Kenmare fire chief Dale Hanson and patrolman Bill Cox. “We opened downtown back up about 6:30 pm,” said Kraft.

Hanson was asked to accompany Haug because of his knowledge of the building. “We went through everything on the main floor and the basement,” he said, adding that Smith showed them the exact location of the box where he’d found the dynamite. “We concentrated on that area.”

According to Smith, Heesch purchased the building from the Rauschenberger family and had originally intended to live there. Smith was hired at that time to install a whirlpool and new sewer pipe, repair leaks, and handle other plumbing matters, which gave him access to all parts of the building. He said he had never seen any dynamite in there.

“We were up and down in there dozens of times,” he said. “The dynamite was just recently put in there.”

He said that Heesch moved to over a year ago, but left behind many of his tools, furniture and household goods. Heesch has made return trips, with his most recent visit in late August through early September when Smith made his business deal.

At least two different parties have contacted Heesch about purchasing the building, but a sale has not been completed. In recent weeks, Smith said he has noticed activity in the building by other interested parties who apparently have access to one of the keys. “[The source of the dynamite] needs to be investigated a little more,” he said.

Kraft said an investigation into the matter is still pending. He contacted Heesch Thursday, who expressed surprise at the news. “He had no knowledge of any dynamite or explosives in the building at all,” Kraft said.

Kraft will coordinate any further investigation with the Minot Bomb Squad and Ward County Sheriff’s Department as needed.

Kraft noted that one of the questions he and other law enforcement personnel heard from residents during Thursday’s situation was “Is this mock or is this real?” While some citizens may not have recognized the severity of the situation, Kraft praised the assistance from the city maintenance staff, the fire department, the city auditor, the sheriff’s department and the Bomb Squad.

“Everybody worked so well together, like clockwork,” he said. “I commend the Minot Bomb Squad for their quick response and their professionalism.”

Kenmare Mayor Roger Ness, who was busy with harvest operations at his farm during the incident, stayed informed of events through frequent phone calls from Kraft and Hanson. “I had complete confidence in them,” he said. “I was very pleased and impressed with how it was handled. They did a professional job of warning people and evacuating. The outcome is exactly what you want.”

He also expressed his gratitude for the response from the Minot Bomb Squad.

Hanson noted some concerns with residents taking the evacuation seriously. “When we evacuate that building, you don’t go in there and go back to work,” he said. “When you first get the call, you wonder how serious is it, but afterwards, when you hear that explosion, you realize that could have been bad.”

He described the process of extracting the dynamite and clearing the buildings as slow, but efficient. “Everything went step by step,” he said. “People can say, ‘How come you didn’t do something sooner?’ but you have to wait until you get the word [to do it].”

Kraft, Hanson and agreed Thursday’s events raised some issues about emergency situations in Kenmare, and the three intended to hold a debriefing session with the parties involved to discuss concerns about evacuation.

“The Memorial Hall has always been the place to go,” said , “but what do you do when that’s the place being evacuated? We have to get other options available, especially for elderly people.”

emphasized the importance of developing an emergency plan for the community. “In a situation like this, all these things come up,” he said. “We’d better get prepared.” 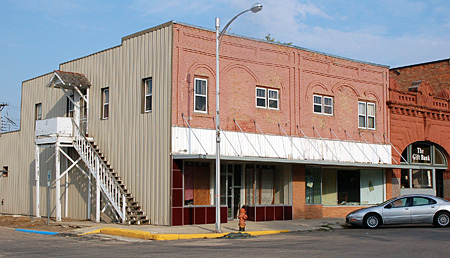 Clothing building on the southwest corner of the downtown business square,

then moved to the Memorial Hall before the Bomb Squad was called in. 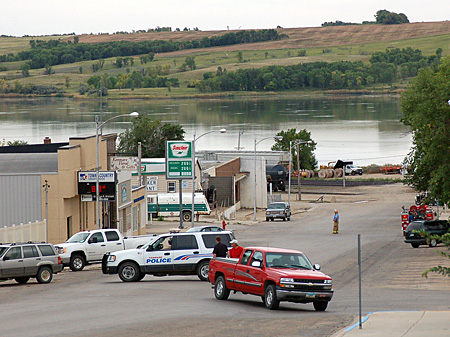 Kenmare police and firemen keep traffic away from Central Avenue.